Dining out mid week is our new favourite thing. Since moving out of town it’s nicer to meet each other after work and enjoy some tasty food. This midweek date took us to The Westroom in the West End. 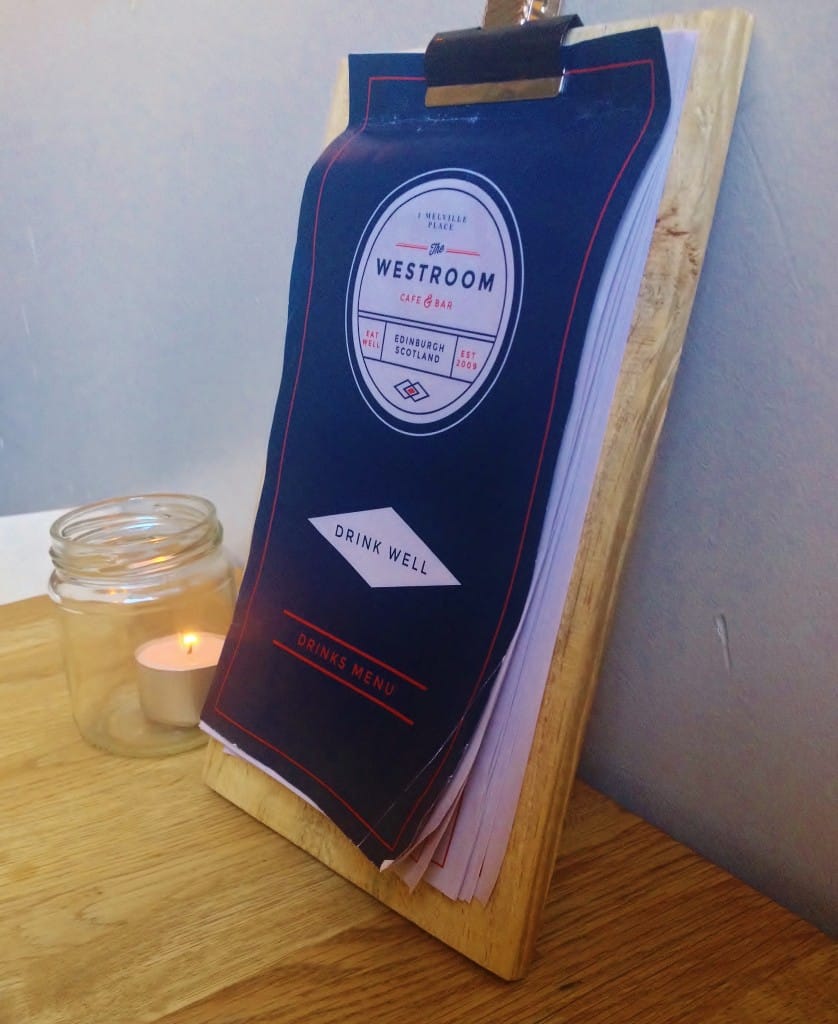 The Westroom is somewhere you’d walk past and think I need to try there. It has an inviting charm to it and it’s what caught our eye. I’d arrived first and waited for Mr Edinburger to arrive. Inside the interior is smart and airy and they make good use of the space they have. The menu is small and compact but even with the small number of choices it was hard to settle on what we wanted. I’d browsed the cocktail menu waiting for Mr E to arrive and decided that a Betty Martini would do just the trick. 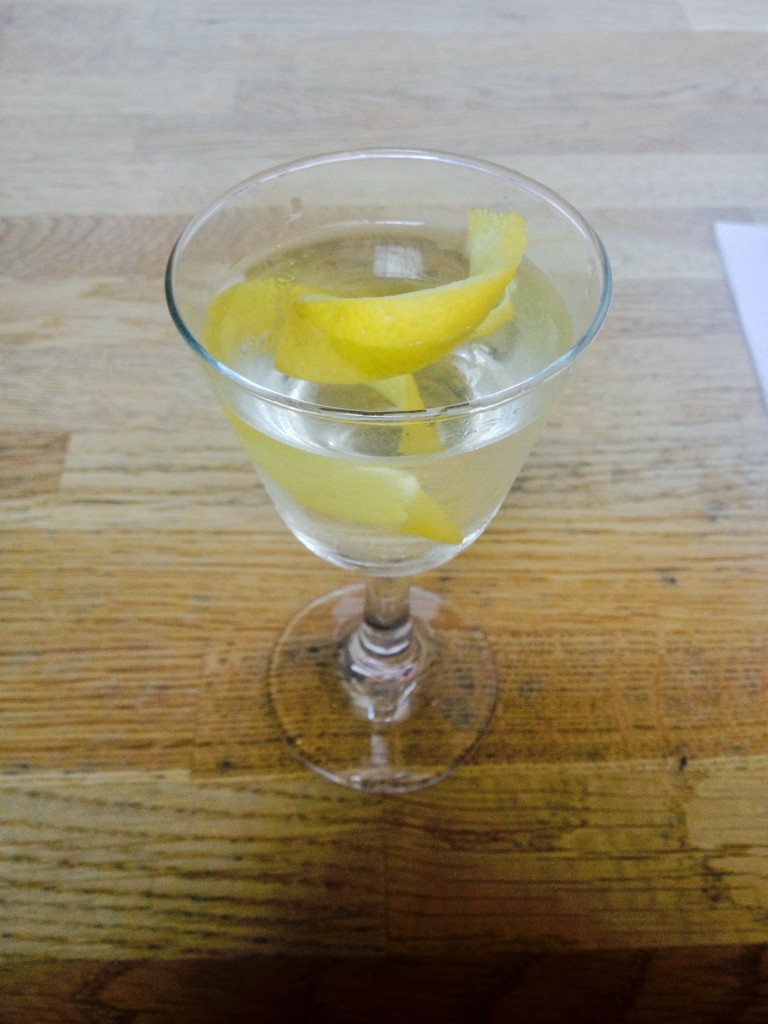 It was a powerful little number. I wasn’t quite prepared for the punch it packed but after the initial shock it was going down a treat. The guys at Westroom pride themselves in their cocktails and from sampling this, I knew that we’d definitely be back to try some more.

Finally Mr E arrived and we ordered our food. To begin we thought we’d try the Scallop, Black Pudding & Bacon and the Scotch Egg and HP sauce. 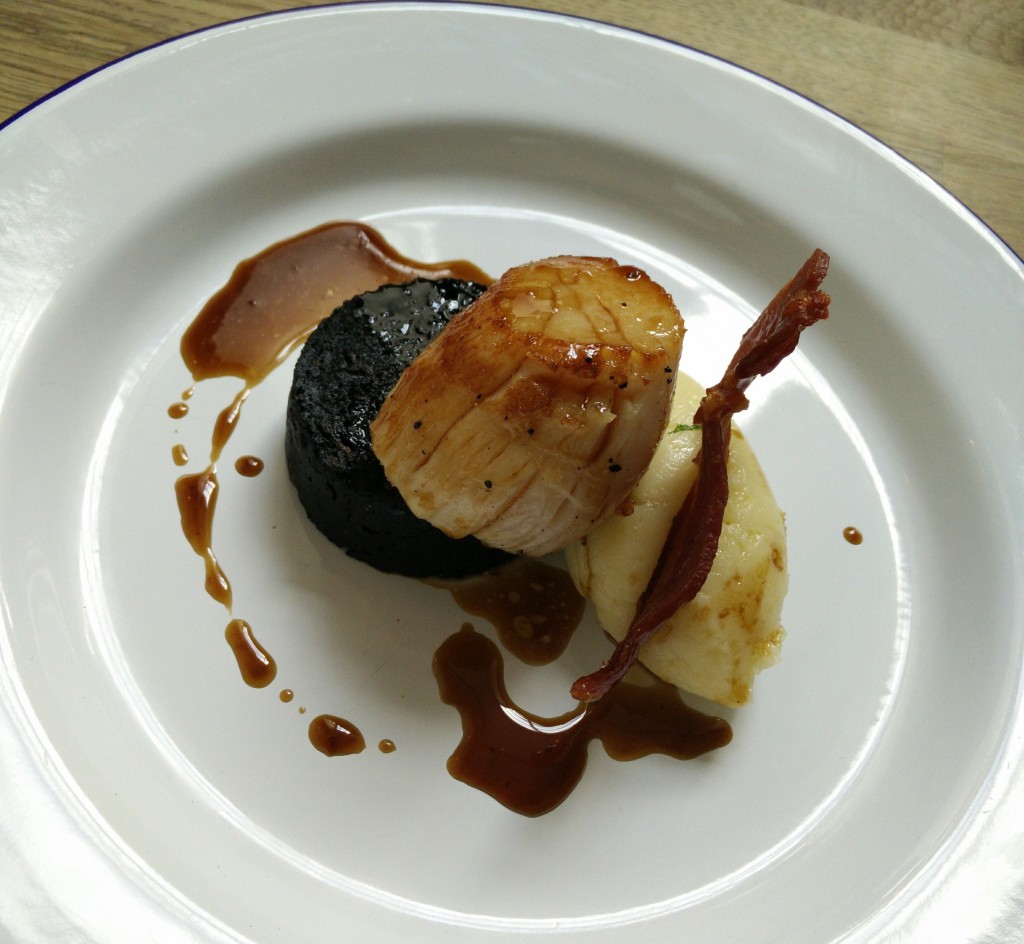 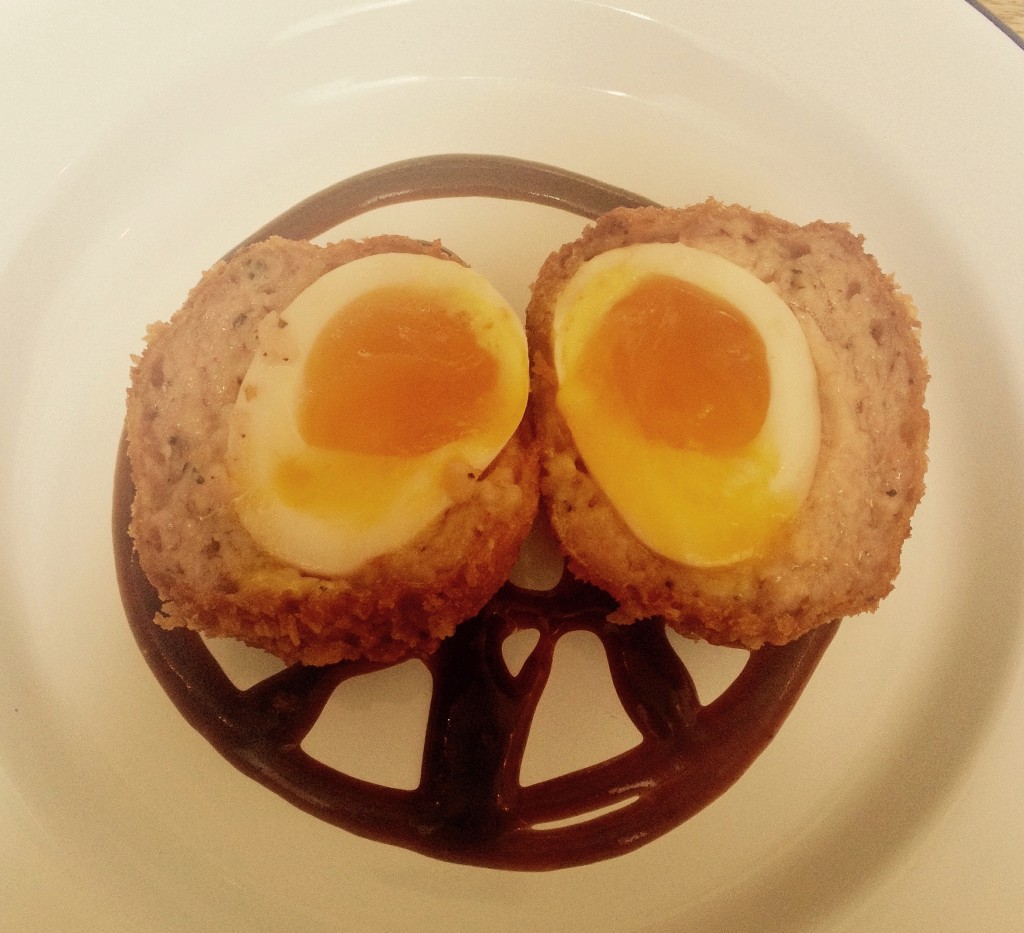 Each was plated up very simply. The scallop and black pudding were cooked well and the crispiness of the bacon added texture to the dish. It’s very easy to overcook scallops but they did it justice and managed to get it spot on. My Scotch egg was a tasty treat. It was crispy on the outside with the sausage remaining juicy. I’d love to know how they managed to keep the egg slightly runny as I can never manage this when i’m at home. The Scotch egg was plated on a design of HP sauce which is fine, if like me you like HP sauce, but it could maybe do with a little something else on the plate to add a splash of colour.

There was a wee break in between starter and main, which allowed us to compare starters and discuss how our days had been. For main course we had ordered 8oz Ribeye, Chips & Café De Paris Béarnaise and Fish Pie with a side dish of broccoli stems. 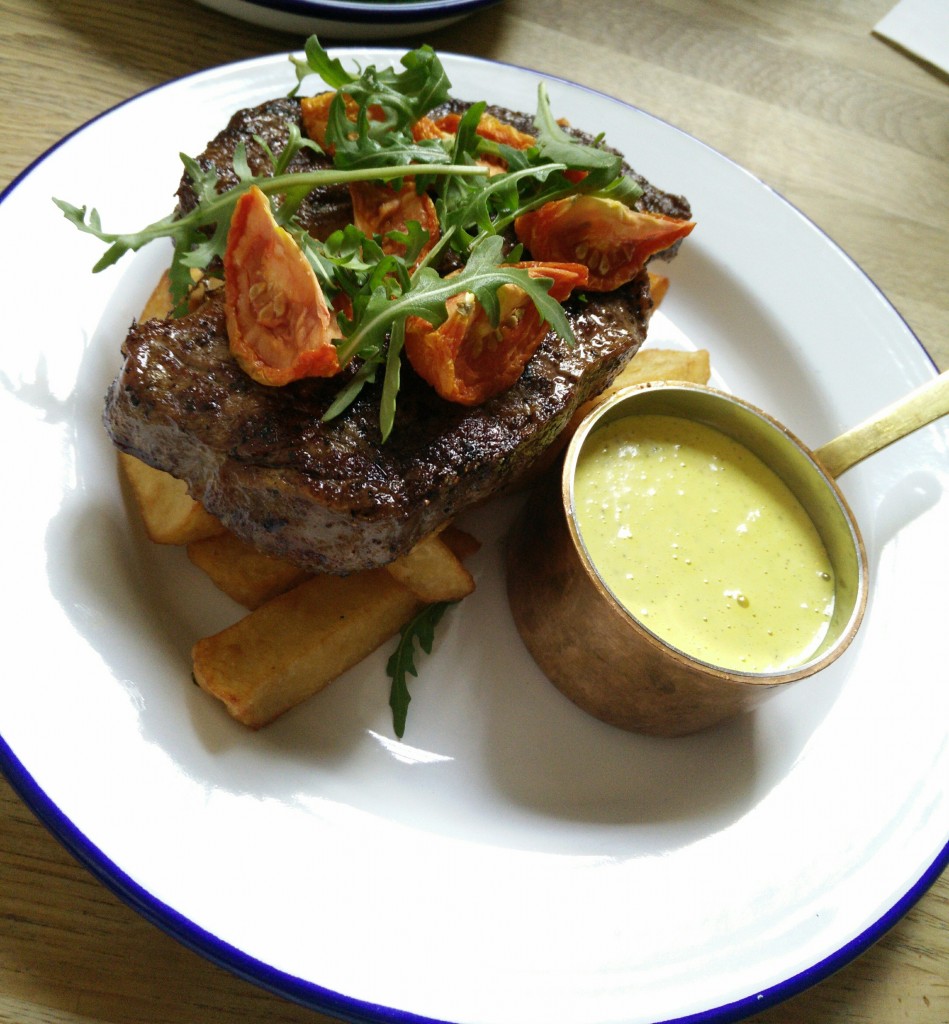 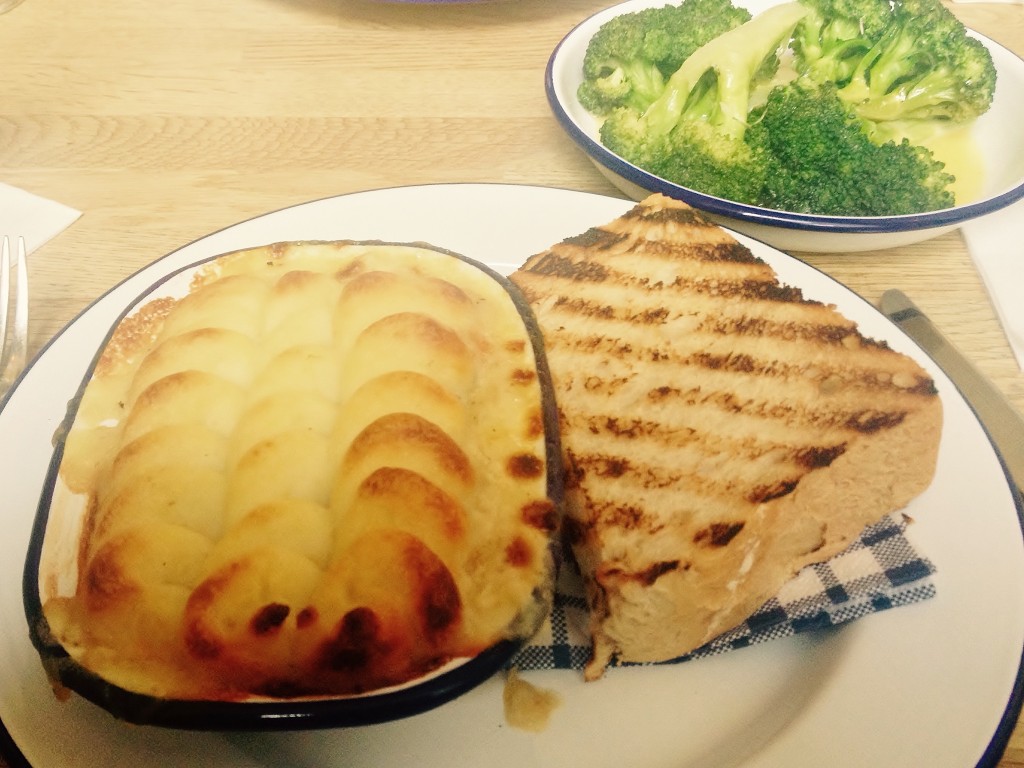 Both dishes came out and looked more substantial than we expected. I was pleased to see my fish pie came with some chunky bread to soak up the remaining sauce from my fish pie. The fish pie itself was an excellent dish. It was filled with salmon, mussels and prawns and plenty of them. The mashed potato was smooth and seasoned well. Overall I really enjoyed it sent back an almost clean plate. The chunky slice of bread was soft and slightly warm and was put to good use. Mr Edinburger was very impressed with his rib eye steak. It came out how he had ordered it, medium to rare, and there was next to no wastage. The chunky chips were delicious, well seasoned and cooked well. You could use the ‘crispy on the outside and fluffy on the inside’ phase to describe them. The Café De Paris Béarnaise sauce was an unusual choice of sauce but one that worked very well. It wasn’t something either of us had tried before but something we’d definitely think about ordering again. With clean plates we were very pleased with our choices.

Our waiter was great. He even managed to tempt us with the dessert menu. Now we probably shouldn’t have but well desserts are an important part and we couldn’t possibly leave without trying them. So we tried the British Cheese Plate and Banana Bread & Chocolate Fudge Sandwich. 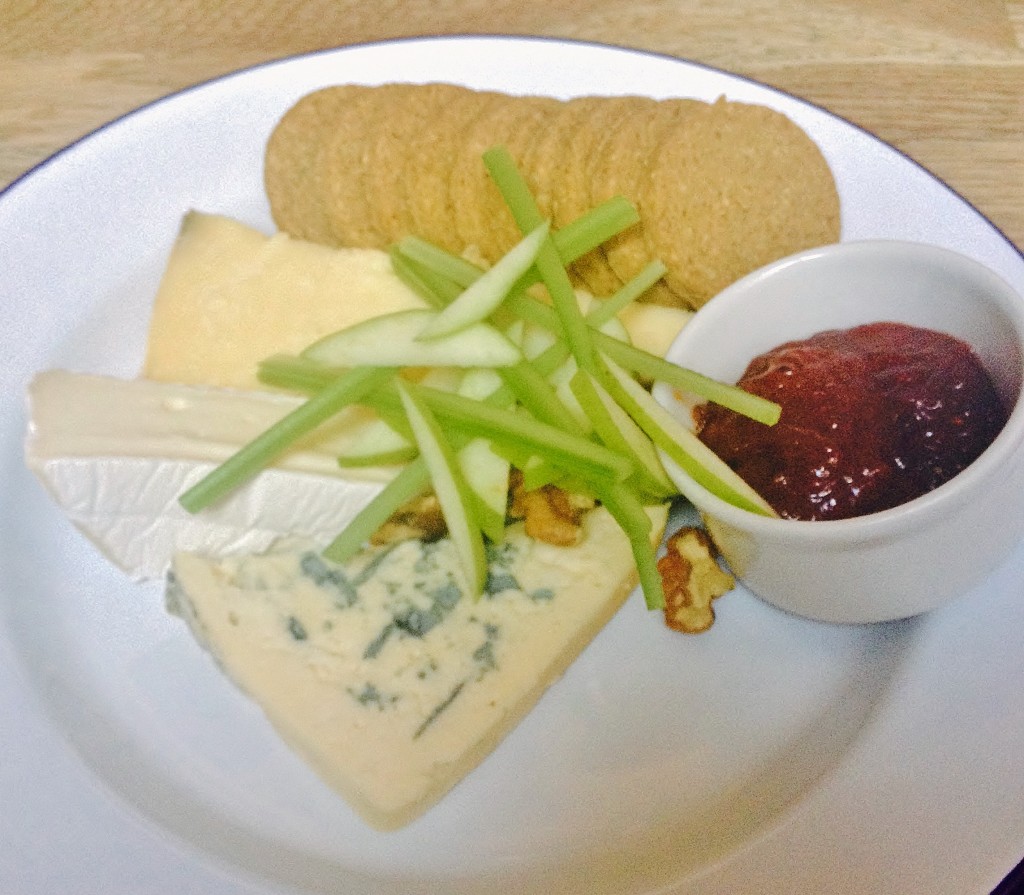 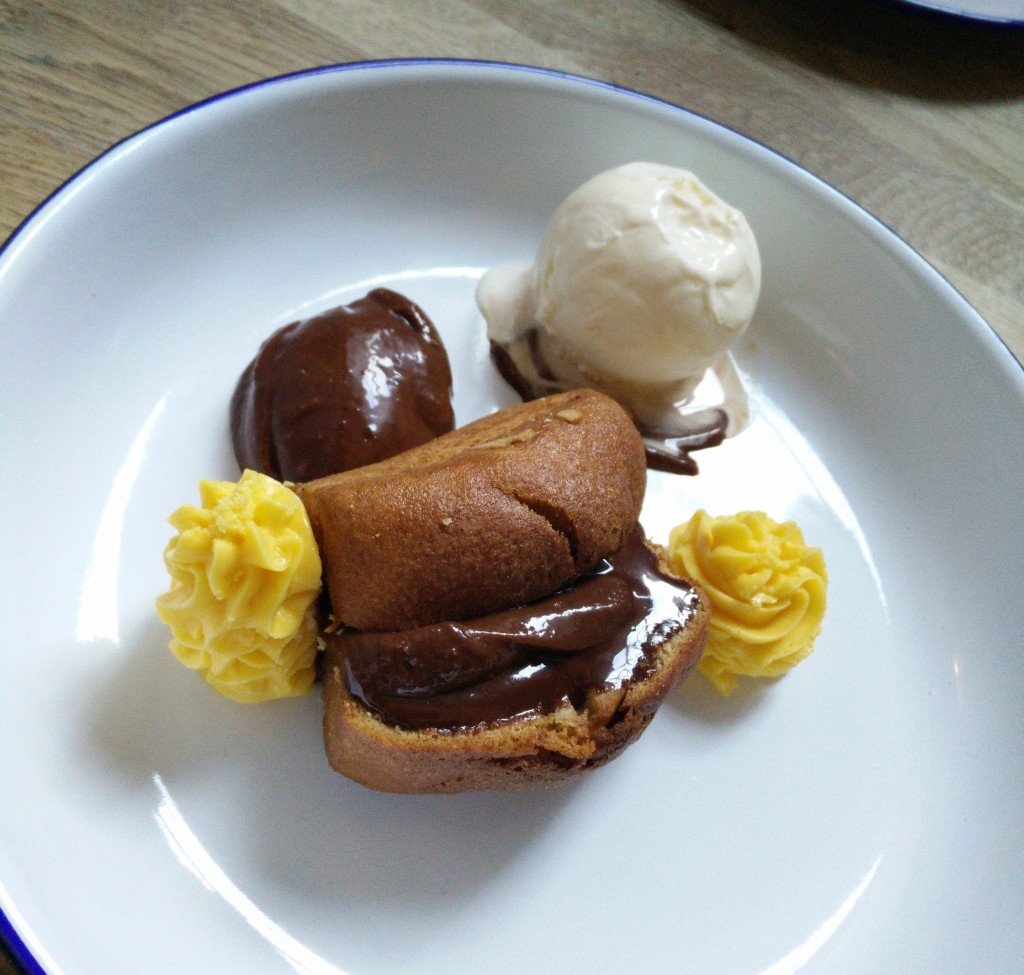 The cheese board was great but pretty filling. You could easily share it between two people. The blue cheese was very tasty and the jam balanced out the saltiness of the cheese. Mr Edinburgers banana loaf dessert was a little more interesting. The banana loaf was soft and was even better when covered in fudge sauce. The buttercream icing added colour to the dish. We really wouldn’t change anything about any of these dishes.

We would say our dinner at The Westroom was a great success. It’s placed itself in the gastropub group and does it very well. The service was great and they were very attentive. We left feeling very full and planning to return a few days later with some friends, but unfortunately it was so popular they didn’t have a table until 9.30pm. The relaxed dining really is a nice change and makes the evening all the more pleasant.