Midweek munching is something which we have gotten very good at. Given that we are now out of town, meeting each other after work for delicious food and then heading home makes it seem a bit more of an event. A few weeks ago we took a trip to The Basement. Hard to believe but Mr E vaguely remembers being in for a drink a number of years ago but this was after some chatting about what The Basement used to look like prior to its makeover. I can safely say that The Basement has taken on a much more classy Mexican feel and on our visit we didn’t see any loudly coloured shirts behind the bar which I’m pretty sure used to be the norm.

We were booked in for 6pm and on arrival the place was a hive of activity. We almost wondered if we’d missed some sort of Bank/public holiday but then realised that those in the know head here straight after work to bag the good seats. Tonight it was my turn to have a wee drink with dinner so I opted for a frozen margarita. It arrived much bigger than expected and also much stronger, you could definitely taste the tequila. 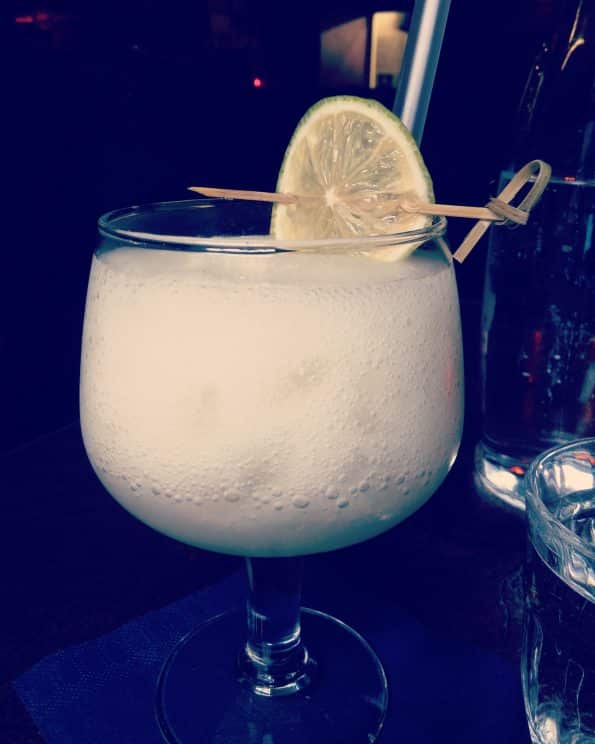 It took us a bit to figure out how the menu worked and if we were hungry enough to order smaller plates to share or if we wanted our own dishes. In the end we weren’t in a sharing mood so opted for a large plate and a side and hoped that we would have room left for one of the rather tasty sounding desserts. 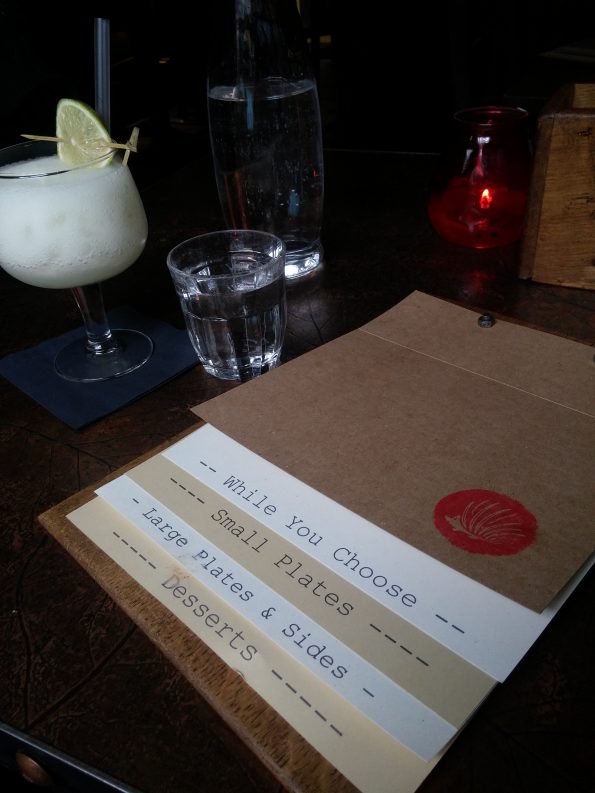 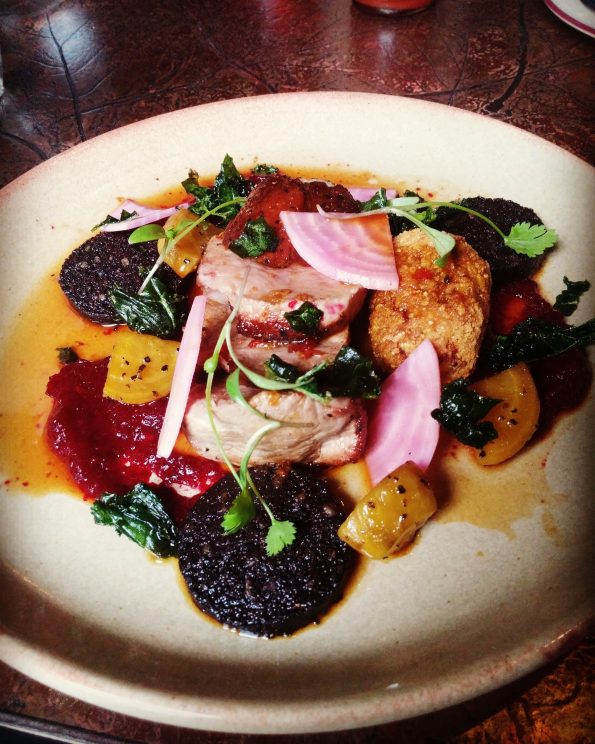 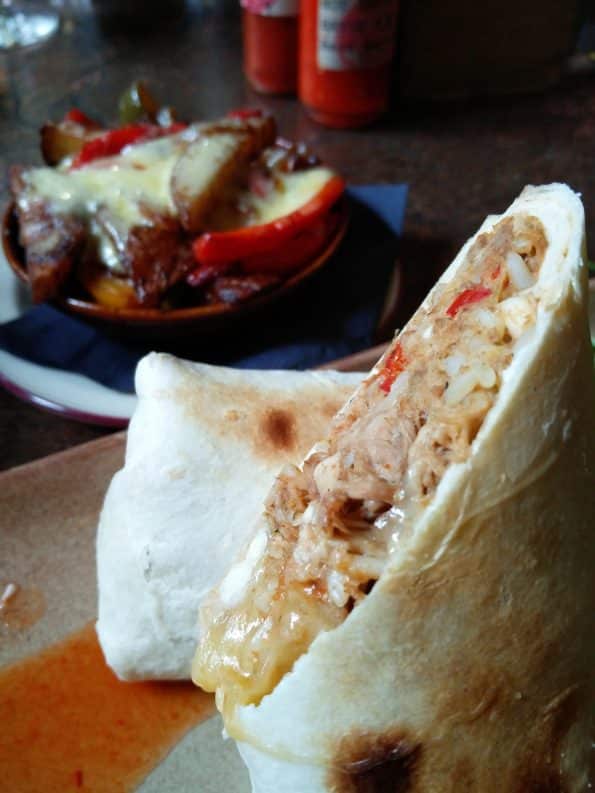 I can safely say that my pork and beetroot dish was tasty. It was packed full of colour and flavour. My favourite beetroot part of the dish was the beetroot jam. It certainly packed a punch but wasn’t overpowering. It worked well with the black pudding and the pork loin was cooked just right, not dry and still full of flavour. The dish overall was great and with my side of spiced hand cut chips it was more than plenty.

Mr E opted for the burrito. Judging by how quiet he had become once the food arrived, I took that as a sign he was enjoying it. The burrito was jam packed and proving to be much more substantial than he had planned for as for his side he had ordered the Mexican poutine – hand cut chips, peppers, onions, chipotle hot sauce and Monterey Jack cheese. The poutine didn’t look like the biggest serving we had seen before but it proved that quantity isn’t everything and the quality was much better than those we had tried previously. It was actually delicious, well seasoned and the right amount of each ingredient.

After a successful first course we decided it would be rude not to have dessert. After all there was pannacotta and chocolate tart for us to tuck into. 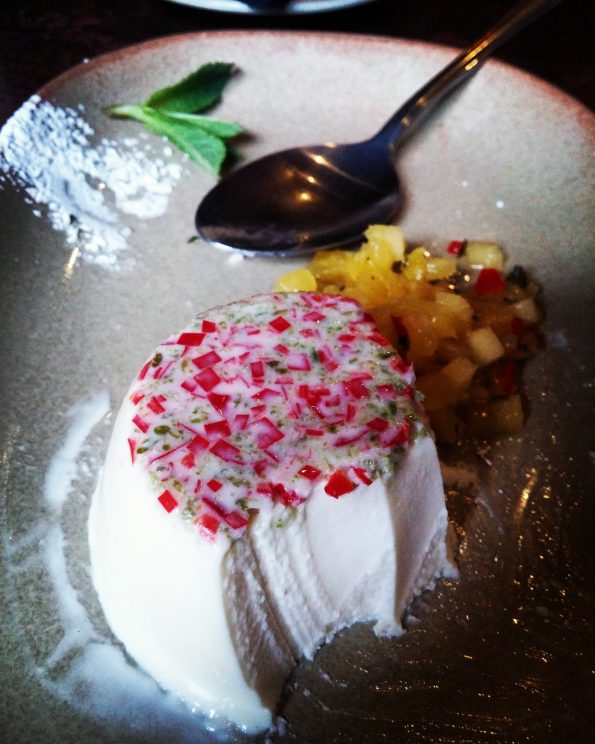 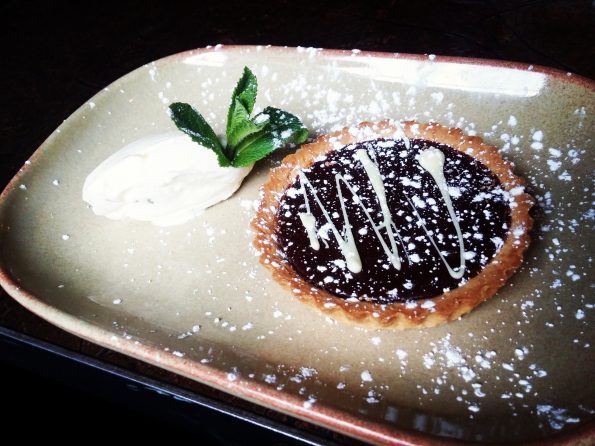 Dessert proved to be as successful as our earlier dishes. My chocolate tart was fantastic. The richness of the chocolate worked well with the zesty lime cream. Normally I wouldn’t be able to finish such a rich tart but to Mr E’s disappointment it was gone before he knew it. His option of the chilli and lime pannacotta was a brave one. Normally he isn’t a pannacotta fan but I think it was the chilli element which swung it for him. I wasn’t brave enough to try it so I can only take his word for it when he said it was delicious and both the lime and chilli could be tasted without one overpowering the other. I’m glad now we had chosen to have dessert. It also gave me time to finish off my margarita.

Overall our visit to the basement was a great experience. The staff are friendly and allowed a nice length of time between each course. We were careful to watch other dishes being brought out for other diners and have made a mental note of what we want to try on our next visit. The food was great and very reasonably priced for the quality. I don’t think The Basement will be going anywhere any time soon but do make sure you visit soon! We would recommend joining their mailing list as there is an introductory offer for new signups. If you visit, make sure you tell us how you got on below.

**We were invited along to dine at The Basement. Our food was complimentary but as always our thoughts and opinions are our own.