Adding to both Edinburgh’s rich festival scene and its strong beer heritage, Stewart Brewing’s Edinburgh Beer Festival will showcase a delectable selection of craft beers and breweries from near and far. A full list will be released nearer the time, but to whet your appetite Stewart’s has confirmed its birthday spectacular. “We’re excited to be making our first wild beer, an imperial stout,” enthused Head Brewer Bruce Smith, the man behind Stewart’s impressive trilogy of barrel aged imperial stouts, Elysium I, II and III, released last November. “Our brewers will also be joining forces with the Lake District’s Hawkshead, Stirlingshire’s Fallen and Oregon’s Crux Fermentation Project to brew up a couple of distinctive collabs.” 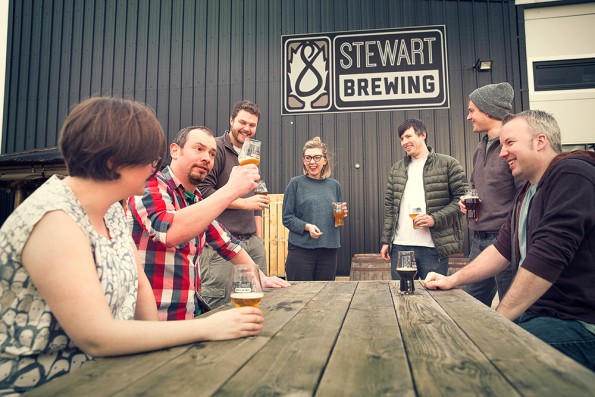 Indeed, unlike Stewart’s Summer Beer and Food Festival, beer and food will not share the limelight. Instead, Edinburgh Beer Festival will focus on innovative beers and leading breweries – which makes both events appropriately named, really. “But you needn’t fear for your rumbling stomach,” festival organiser and Marketing Manager Emily Gray explains, “as with a choice of three bespoke menus from local food truck favourites, all you’ll be left hungry for is another great Stewart’s festival.” Enjoy pizza hot from Big Blu’s wood burner, pulled pork and ‘slaw rolls from Jones & Son and magnificent burgers and veggie delights from Fresh rEVOLution. On top of all this, there’ll be storming indie, rock and blues tunes from Leith bandsThe Alibis and Fight, Robots! Fight! Because what’s a festival without music?

Keen to promote the event to their locals, Stewart’s are offering a discounted ticket price of £12.50 to Midlothian residents in postcodes EH18, EH19, EH20 and EH23-26. Early bird tickets are also available to everyone until February 29th and regular tickets are priced at £15. Buy them online or in person in Stewart’s brewery shop and on Eventbrite. So join Stewart’s in raising a glass to great beer and kick off festival season in style this April.

Edinburgh Beer Festival will offer gluten free beer fans the rare opportunity to enjoy a beer festival with a range of beers to choose from. Four beers will be brewed by Stewart’s exclusively for the festival, including a coffee IPA and a gooseberry saison. There will also be 15 non-gluten free cask and keg lines showcasing Stewart favourites, guest breweries and collaboration beers, including brews with the Lake District’s Hawkshead and Stirlingshire’s Fallen.

Stewart Brewing have added an unusual line up of beers to their Edinburgh Beer Festival on Saturday April 16th. Alongside several exciting brewery collaborations, attendees will be able to enjoy a number of ‘Gluten Freedom’ beers, brewed with naturally gluten free ingredients. Beer festivals aren’t a typical destination for the gluten intolerant community. But brewery shop manager Richard Webb noticed that Stewart’s small-batch Gluten Freedom beers were proving popular. “It made us realise there must be lots of deprived beer lovers out there,” Richard commented, “and they might enjoy the opportunity to attend a beer festival with their friends.” So Stewart’s resident gluten free brewer, Craig Scotland, decided to brew not one but four new beers exclusively for the festival, including a gooseberry saison, coffee IPA, raspberry and chilli saison and a New Zealand-hopped IPA. “It’s rare to find gluten free beers, let alone a selection of them,” explained Craig, who studied gluten free beers as part of his Heriot Watt Brewing and Distilling Masters degree. Describing beer as ‘gluten free’ can be a minefield for a brewery. Whilst some brewers use an enzyme to remove gluten from beer produced in the usual way, at Stewart’s Craig prefers to swap barley for sorghum and use only ingredients which naturally don’t contain gluten. However, coeliacs should note that whilst the beers are brewed on a separate kit, the main brewery is not a gluten free environment. Legal stuff aside, as well as the Gluten Freedom beers gluten intolerant attendees can enjoy Roots craft soda, Edinburgh Gin or Brewlab cold brew coffee, straight or in martinis. They can then soak up the alcohol with gluten free options from Edinburgh Beer Festival’s food providers, including pizza from Big Blu, Irish pakora from Fresh rEVOLution and pulled pork lettuce wraps from Jones & Son Bespoke BBQ.

So in summary all the important info!! 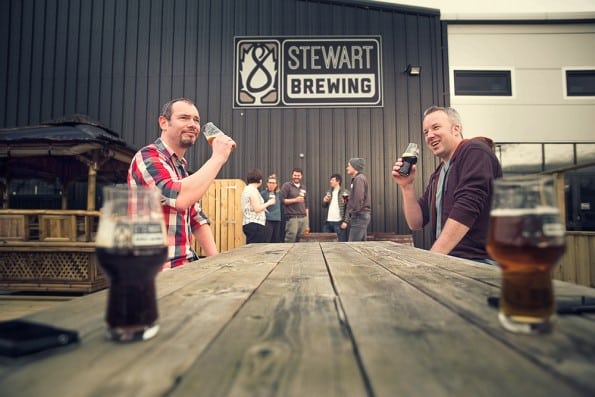