Before the madness of the Festival hit town we made the most of an invitation to try out The Pompadour by Galvin. The week previous we had been to The Kitchin so fine dining was starting to become something of a habit for us on a Saturday afternoon. We’ve previously been to The Caledonian to try out their afternoon tea and also to stay over. Both times the food has been delicious and the setting makes it even more special so we couldn’t wait to see what was ahead of us this Saturday lunchtime.

There has recently been a change of Head Chef, Daniel Ashmore. With extensive experience having previously worked at Fischers at Baslow Hall before moving to London and joining the team at Michelin-starred The Square in Mayfair. Daniel has also spent time at Restaurant Tom Aitkens and Michelin-starred La Trompette before moving to Edinburgh. Here in Edinburgh he begun in a role as junior sous chef at Number One at The Balmoral Hotel before being promoted to head chef at Hadrian’s Brasserie at The Balmoral. Later he returned to to Number One as sous chef and in March 2017, Daniel joined The Pompadour by Galvin as head chef. With an extensive CV like that we had high expectations of what was ahead. 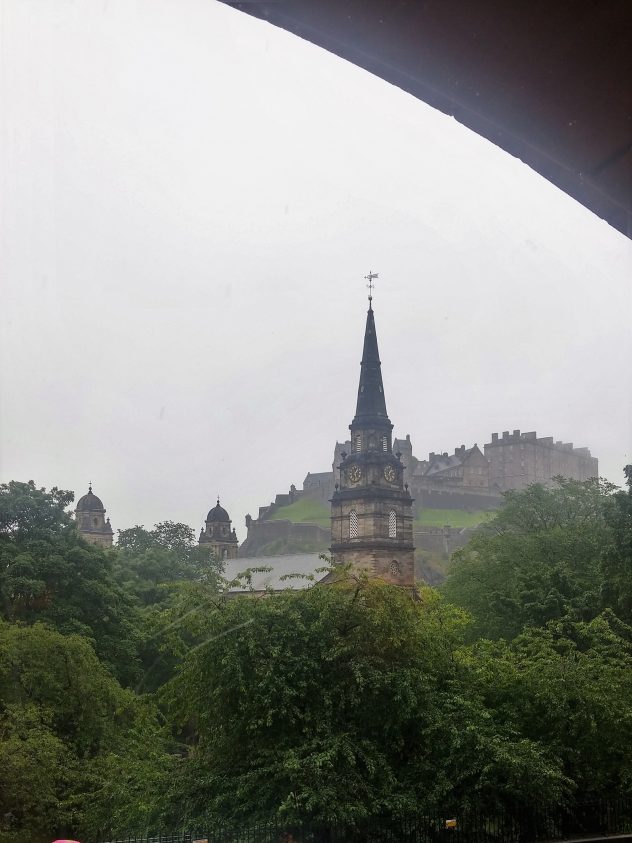 If you’ve never been to the Pompadour before it really is a spectacular room. Situated right of the bottom of Lothian Room you have fantastic views of the Castle. Unfortunately on the day we visited the weather wasn’t great but we didn’t let that dampen our spirits. Today we were fortunate to be seated right at the window and could enjoy views of the Castle and people watch.

Our drinks order was swiftly taken. With having a mini burger on board the staff were lovely and created a non-alcoholic ginger drink for me, served in a champagne flute so I could pretend it was really champagne. Mr E opted for a Horse’s Neck. This was the sort of afternoon we could definitely get used to. Sipping on our drinks we made or selections and eagerly awaited their arrival.

First up was an amuse bouche. Mackerel mousse with pickled fennel and a crisp of mackerel skin. This delicate looking dish may look like it doesn’t pack much punch flavour wise but appearances can be deceiving. It was full of flavour, fresh mackerel coming through and then fennel. Both flavours worked very well together, it was a little bit too fishy for me but there again i’m not a big mackerel fan. Mr E who is, loved the dish. They had set the bar high. 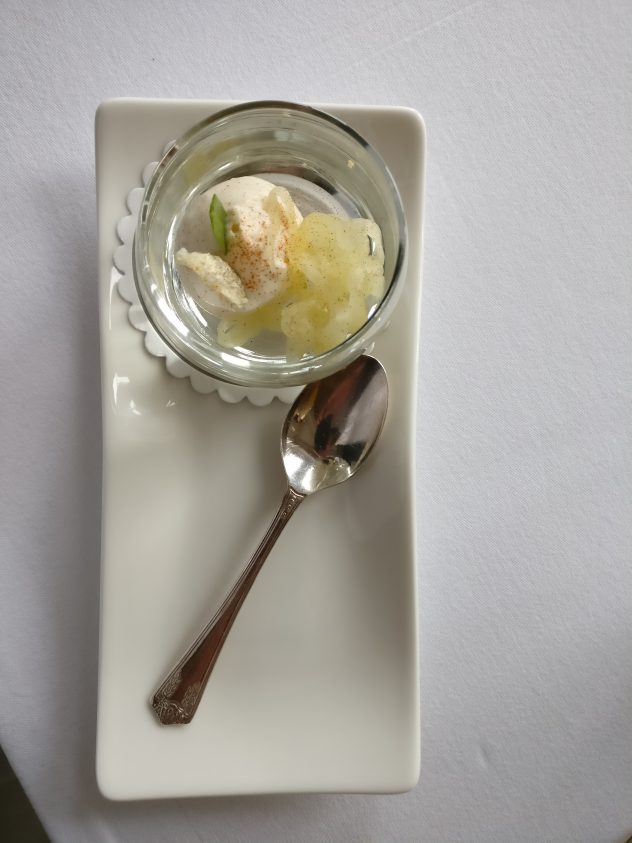 In between courses the bread brought to our table was delicious. The seeded brown bread was very moreish. It took all my self resistant to stop myself from asking if they could just leave the big basket. Service at The Pompadour is second to none, you really are very well looked after and they know when exactly the right time is to approach you without you even having to get their attention. Starters were soon on their way. 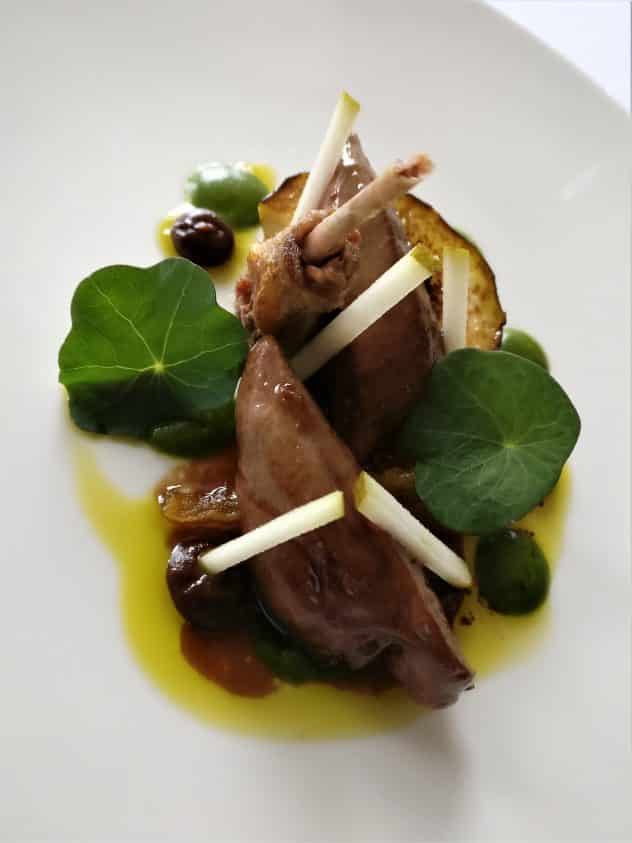 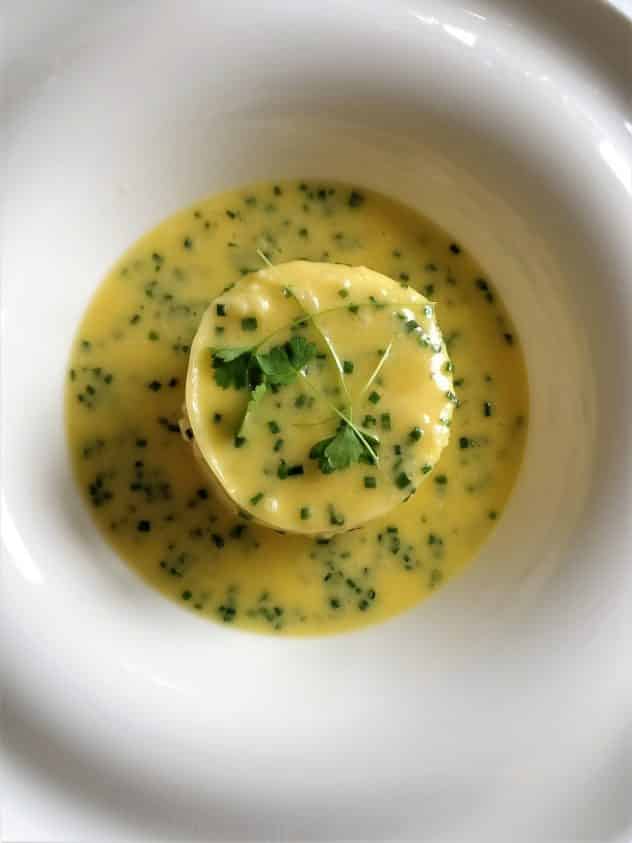 Mr E found himself tucking into what was probably the best plate of pigeon we’ve had in Edinburgh. It didn’t look like there was much meat but there was more than enough for a starter. The meat was cooked perfectly and the different textures of pear and pigeon together worked well. The dish was well seasoned and certainly left Mr E wanting more. My dish was a Lasagne of North Berwick crab. I wasn’t quite sure exactly what to expect but it certainly did not disappoint. The dish was fresh, full of delicious crab held together by a scallop mousse and delicate fine layers of pasta to top it off. The Beurre Nantais wass flavoured with shallots and chives and added another flavour to the dish. It’s careful not to overpower the crab which is what this dish is really all about. I’ve never had so much crab in a starter before and Mr E had to help me finish it off. 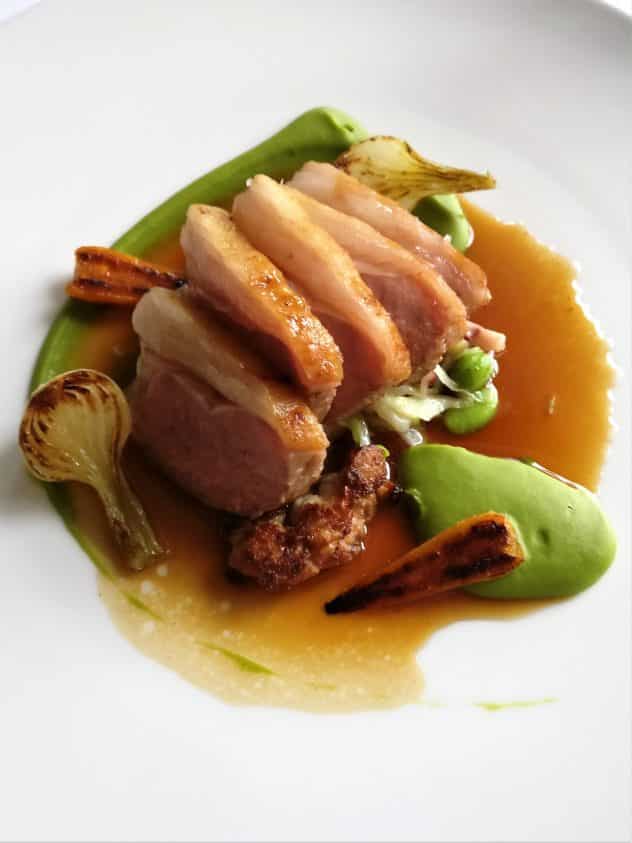 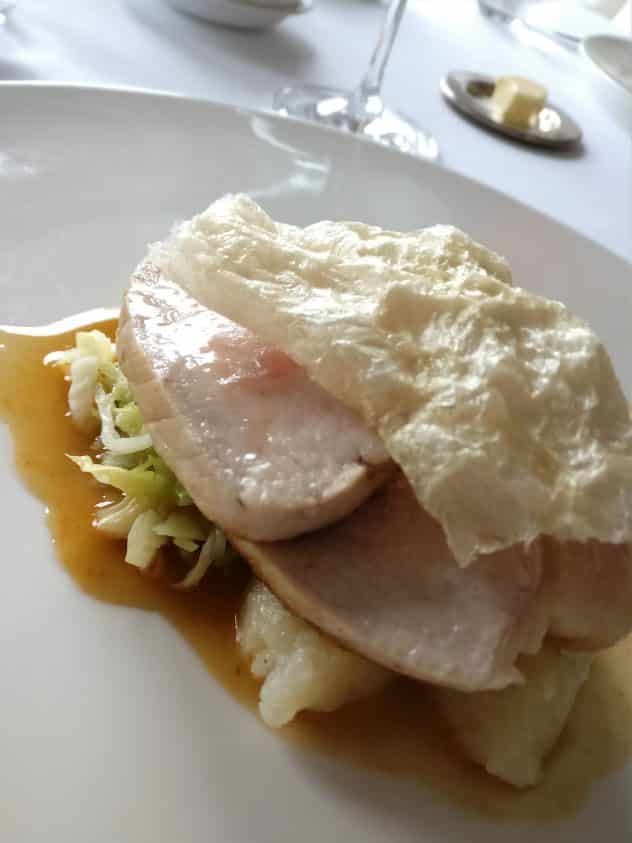 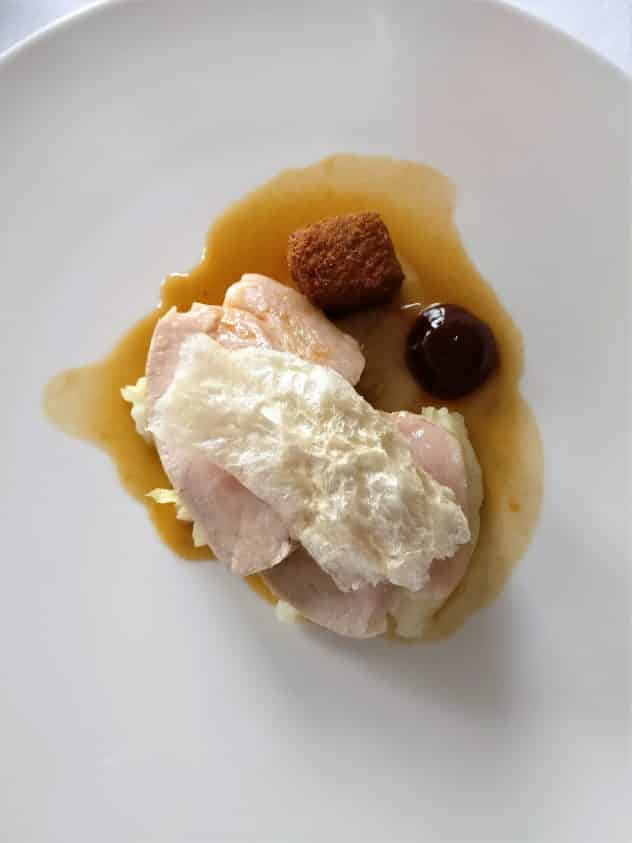 I think I hit the nail on the head with my main dish. The lamb was tender and full of flavour. The sharpness of the pea puree along with the sweet breads really set this dish off. I could have easily had another plate of this tasty dish. Mr E also thoroughly enjoyed his pork. He liked all elements of the dish but wasn’t entirely sold on the grapefruit part of the dish. He found it a little too sharp for his liking. When speaking with Daniel after he said it’s definitely a dish that splits people. Some diners love the grapefruit others not so much but for him it’s one of his favourites. Even after we had left Mr E was still raving about the light pork crackling on this dish. It was so good there wasn’t time for me to even ask to try it. 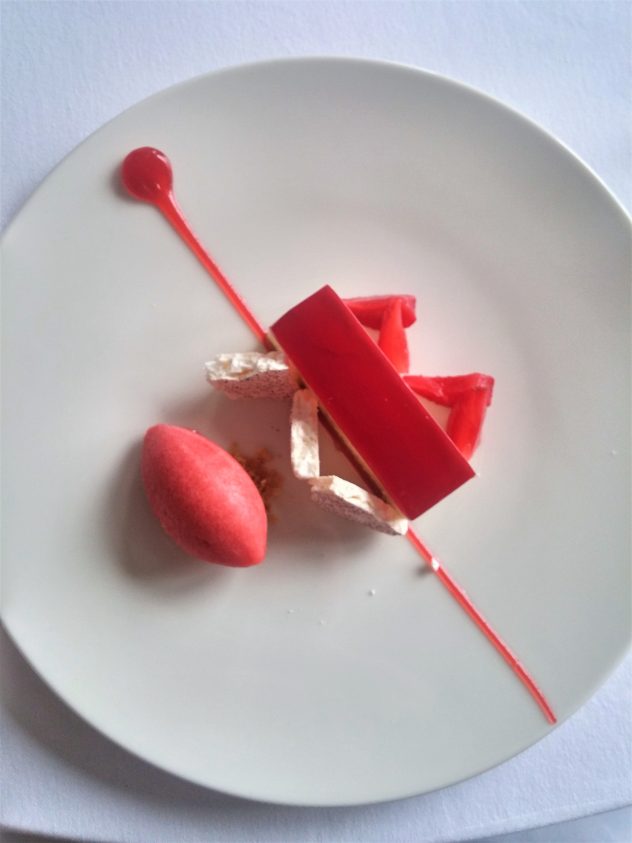 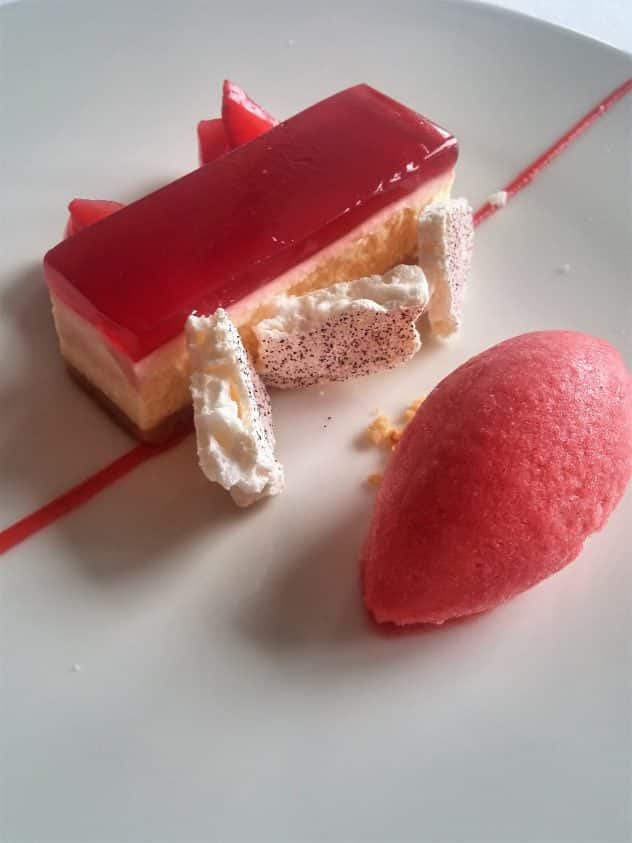 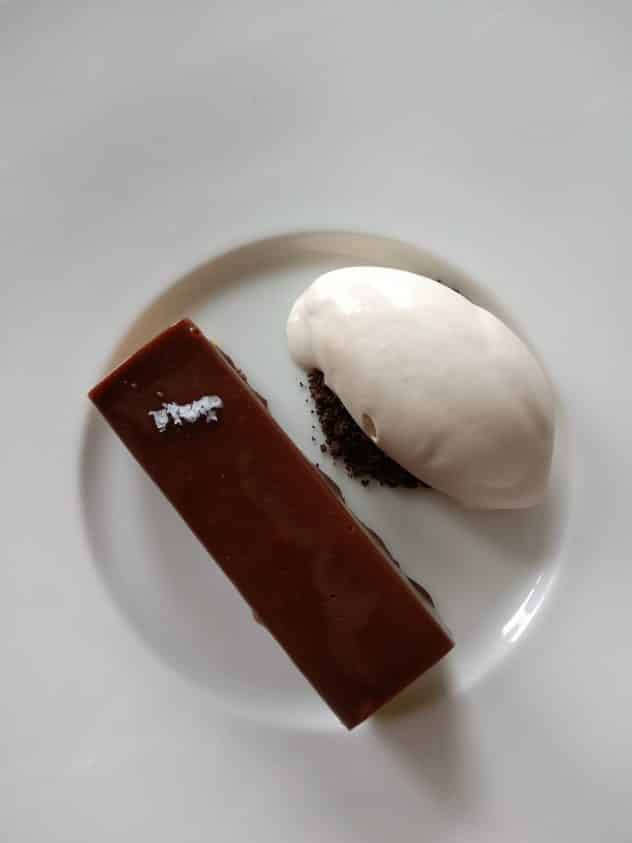 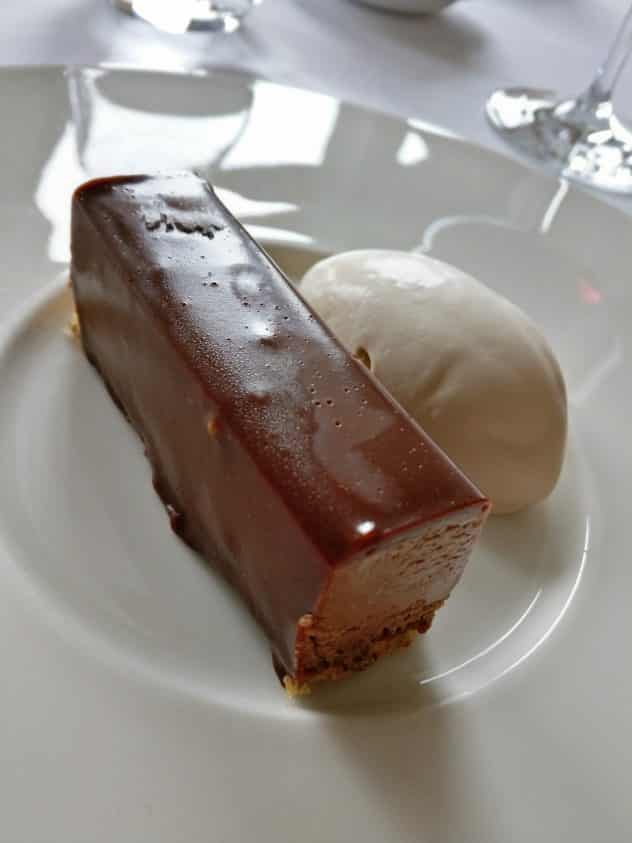 Both desserts were spectacular. The crowdie cheesecake was easily the best cheesecake I’ve ever had. The base was so rich and when eaten with the crowdie and strawberries it was like an explosion of different flavours. Daniel later confessed that the base tastes so good due to the insane amount of butter it takes to make it so rich. The hazelnut, caramel and chocolate bar Mr E was enjoying was equally as fantastic. From the outside it looks like a rich block of chocolate but when you cut into it you find that it has a lovely light mousse-like centre. Sometimes with rich chocolate dishes all you can taste is chocolate but with this dish you could easily taste all of the flavours.

Now after all that you would think that we wouldn’t have room for much else but I can always squeeze in a cup of tea and Mr E likes to end on a espresso. Before we knew it there was petit fours on the table. All handmade in house the passionfruit jelly is excellent. We both thoroughly enjoyed our visit to The Pompadour. It is a stunning location and the food lived up to our expectations. We had a lovely afternoon and are plotting our return. If you have a special occasion or are just wanting to treat yourself or loved one we would highly recommend booking a table at The Pompadour. Everything about it is stunning. 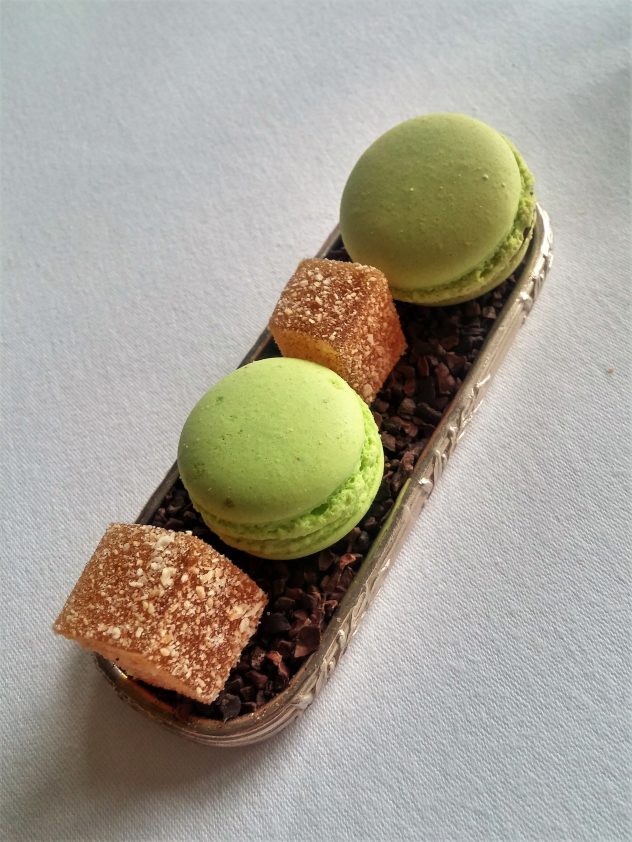 *We were invited along to try lunch at The Pompadour, this in no way influences our opinions and all views expressed are our own.