It seems like ages ago now that we visited Reekies Smokehouse but it isn’t that long ago. We’d had a failed attempt due to Mrs E not feeling great but the following week she was feeling much better and ready to tackle what Reekies had on offer.

Arriving first I took a seat and waited for Mr E to arrive. The BBQ smell hits you before you even enter the door and it smelled fantastic. Whilst waiting I noticed that they do a roaring takeaway trade and made a mental note to visit when we fancy something tasty to take away. None of those who ordered had to wait particularly long. Ordering a range of meat feasts and wraps everything was looking and smelling delicious. Mr E finally arrived and we both took no time at all in deciding we wanted to try the meat feast, 4 dishes of meat and 4 sides what is there not to like. It seemed like the right mix of different types of meats and catered for both us.

Keeping things simple you order up at the counter, are given a disc and once it starts flashing and vibrating you pop back up and collect your food. Reekies have a fab selection of local soft drinks and alcoholic drinks. They even have a guest beer list which included some of Mr E’s favourites. Tonight I was on the bon accord rhubarb which had been recommended and it didn’t disappoint. 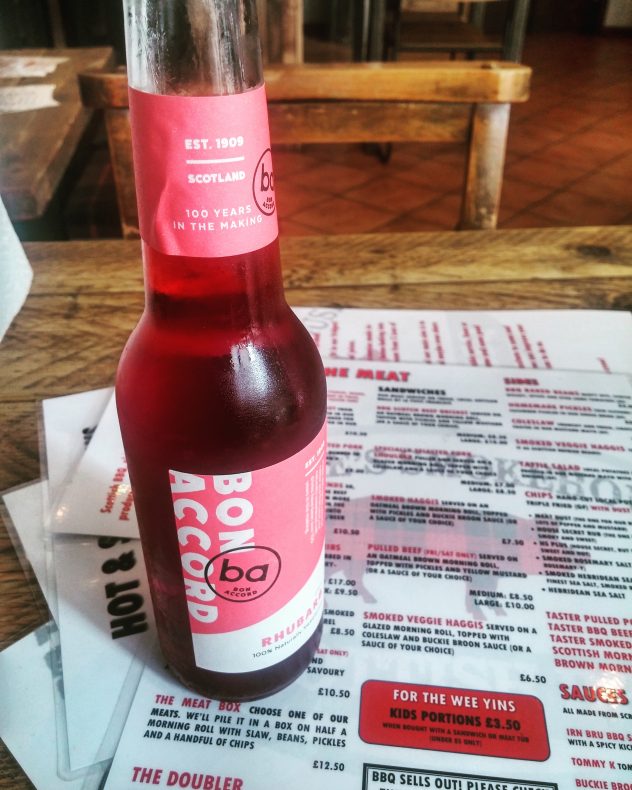 With all the meat we had ordered we had expected to wait a good 25-30 minutes but when our buzzer started flashing after between 15-20 minutes we were pleasantly surprised. Off Mr E went to retrieve our tray of meat. When he set it down, I thought it might not be enough now that one of us is eating for two but they do say it serves between 2-4 people depending on whether it’s as a snack with some drinks or a main meal. 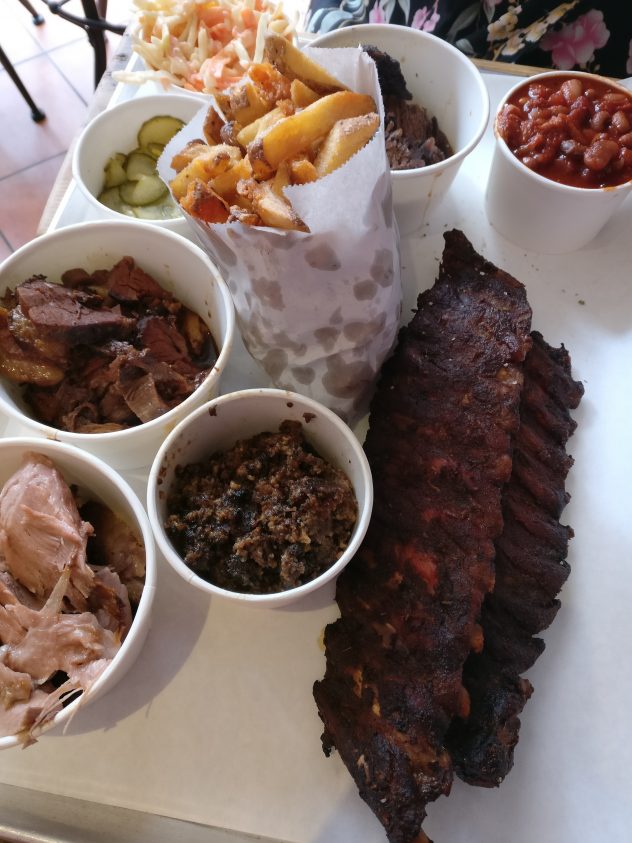 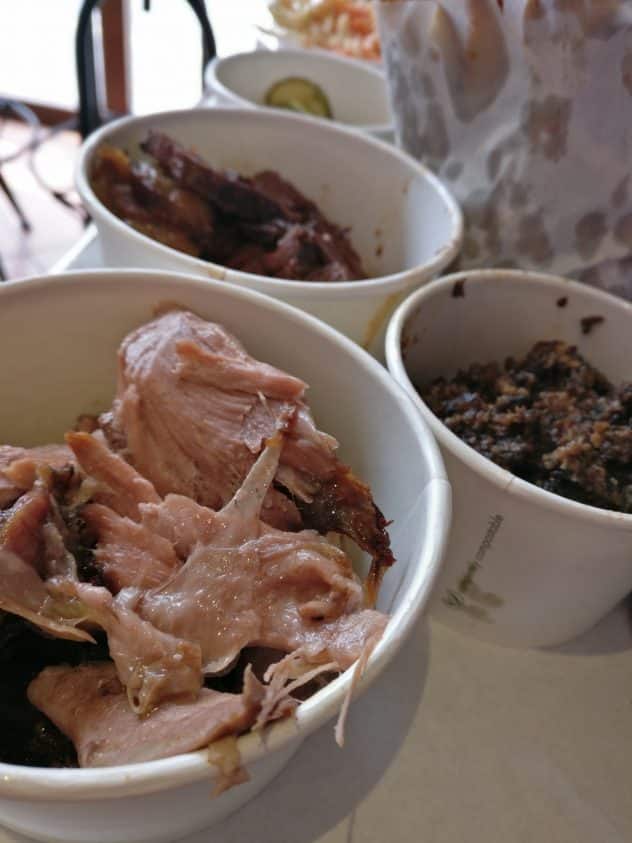 On our tray we had BBQ SCOTCH BEEF BRISKET (local beef, rubbed in spicy meat dust, slow-cooked for 18-21 hours, sliced and dipped in gravy/beer stock), BBQ SCOTCH BEEF BURNT ENDS (basically the “point” from the beef brisket once it’s cooked, with more spicy meat dust rubbed on, chucked back in the smoker for a few hours, cut into chunks and dipped in gravy/beer stock), SMOKED BABY BACK PORK RIBS (specially selected pork, rubbed in house secret spice mix and dry-smoked) and SMOKED SPECIALLY SELECTED PORK SHOULDER (local pork, rubbed in house secret spice mix, BBQ’D for 18-21 hours). For good measure we were given an extra tub of SMOKED HAGGIS LOCAL HAGGIS which has been smoked over an oak and chopped whisky barrel.

Now after that list of meat you’d be wondering how on earth we had any room for sides. The sides with our meat were Reekie’s own BBQ baked beans, homemade pickles, coleslaw and chips with a smoked rosemary dusting. With so many options of flavours and sauces we definitely weren’t stuck for choice. The choices didn’t end there, Reekie’s make their own sauce and are particularly good at an Irn Bru BBQ sauce. 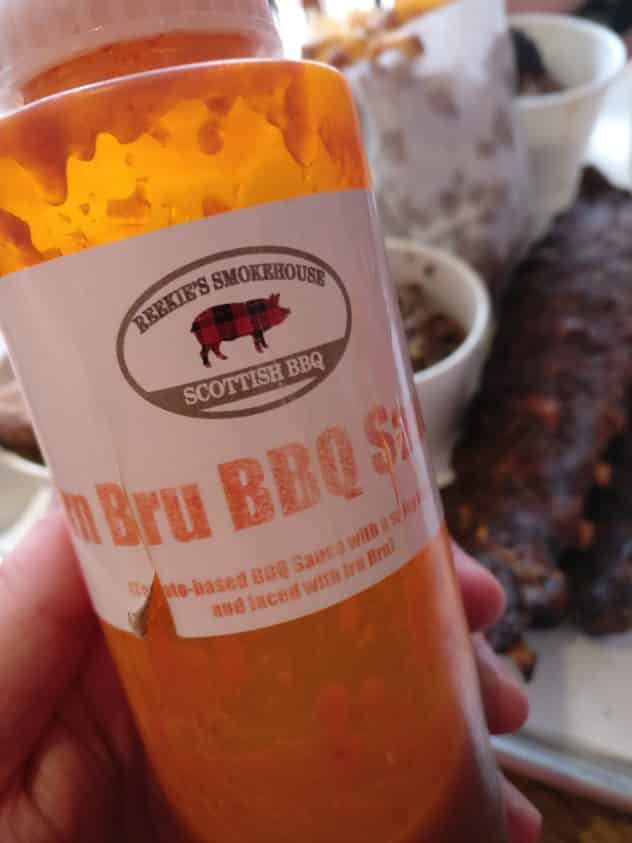 Once we took in all the food in front of us, we really didn’t know where to begin. Reekie’s are all about flavour so if you’re looking for nicely presented food then it isn’t for you. To us the food looked delicious and when we tucked in it definitely didn’t disappoint. Everything from the brisket to burnt ends was delicious. The chips are a definite highlight as well.

All the meat is tender and packs a good punch of flavour. Some of it is spicy and some more sweet. As we continued to eat we noticed that we started to fill up and there was still have a tray of meat left. I particularly liked the ribs. Each of the tubs holds between 180-200g of meat which is basically an 8oz steak per tub, that is a lot of meat! Eventually we had to admit defeat as I stuffed another chip in and thought I actually couldn’t eat any more. The great thing about the tubs is that they have nifty little lids which mean you can take the leftovers away and tuck into them at home.

Overall, we had a great evening at Reekies. For the amount of meat we had the meat fest is great value and it’s definitely worth taking a wander down and giving it a try. Lots of groups of folk came and went whilst we were there and everyone seemed to be leaving pretty happy. We definitely will be back to try a few of the wraps and other tasty things they have on their menu. Keep an eye out as well as Reekie’s often attend beer and food events.