Now you could be forgiven for thinking what on earth were we doing eating on the Royal Mile. It’s known for a few gems like Wedgwood and Angels with Bagpipes but mention a burger bar and most folk think too touristy. We were headed to Usher Hall that evening to see the talented Ben Howard and had seen a number of posts recently on Just Burgers and Beers and had to try it. After all we need to try out these places and let you know how they are 🙂

Just Burgers and Beers is situated on the Royal Mile next to St Giles Cathedral. On approach Mr Edinburger’s eyes were attracted to the board outside which from a distance looked like ‘free beer’ but on closer inspection it actually said ‘free wifi, great beer’.

We arrived around 5.30pm on a Saturday evening and there was only a few other diners in. We thought it unusual it would be so quiet at that time of day but quickly sat down and set about picking what we wanted. The menu had far too many burgers that we wanted and I hadn’t even begun to look at the beer on offer when our server came to take our order. By this point, it was getting busy, a few larger groups arrived and the place was full of chat and atmosphere.

Now we should warn you, before you see the pictures, that we’ve had something of a camera malfunction. Think it was the lighting, which was a tad red, that has meant our pictures aren’t so good. But we’ve included then to give you an idea of the size etc. of the burgers. 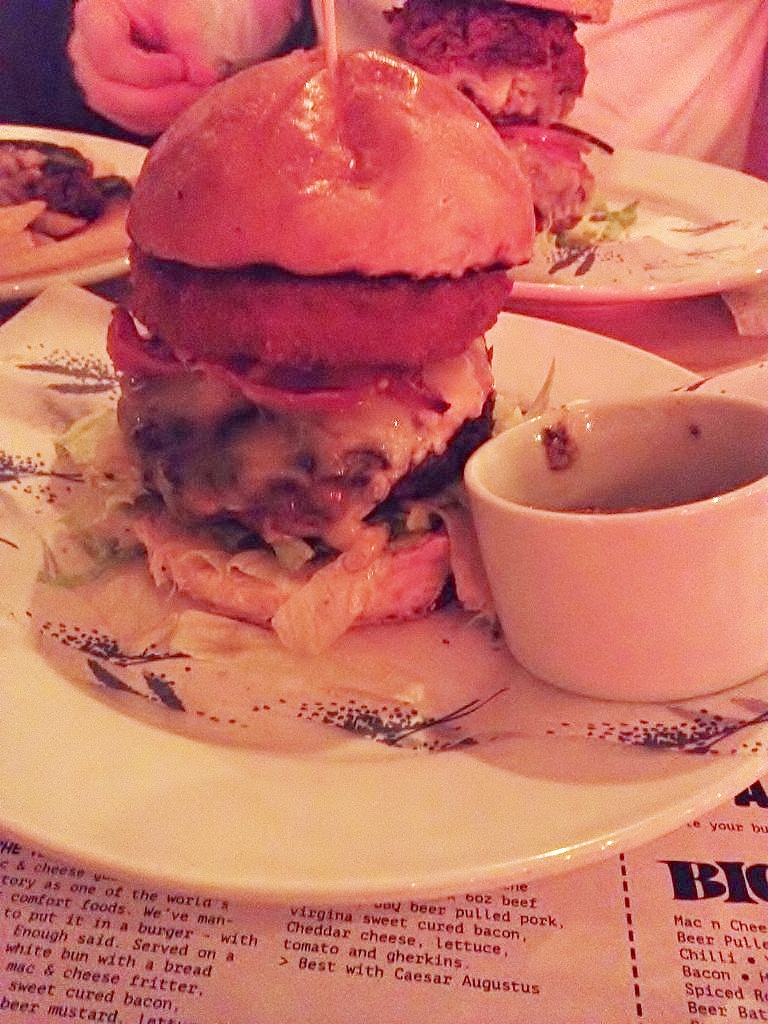 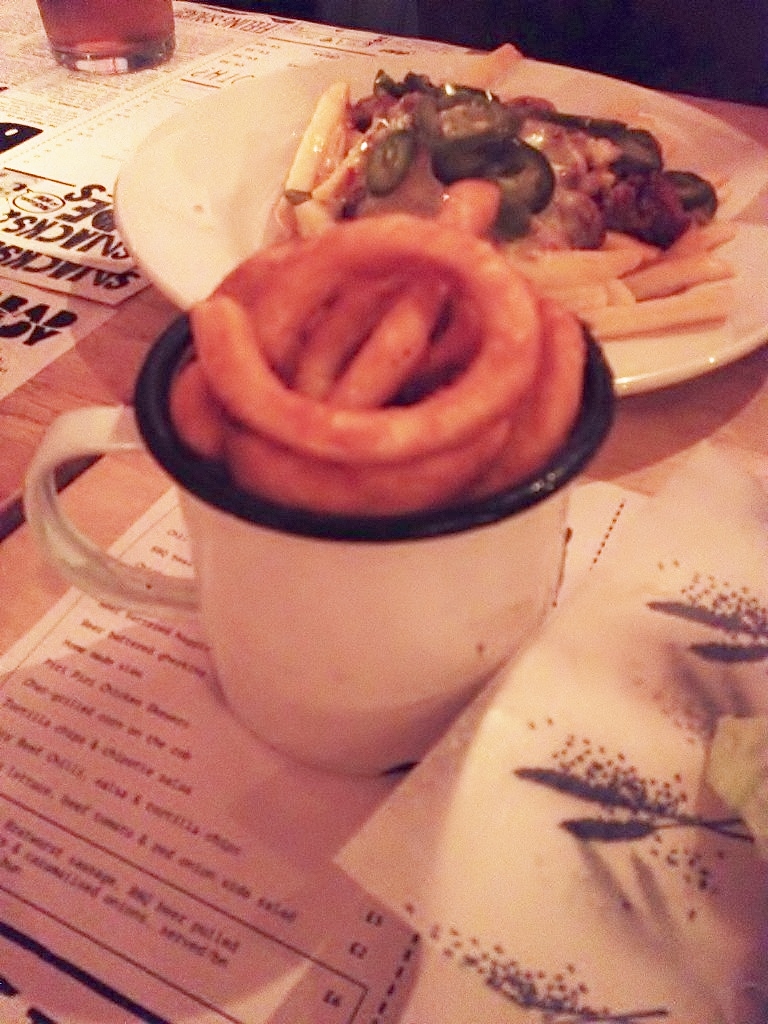 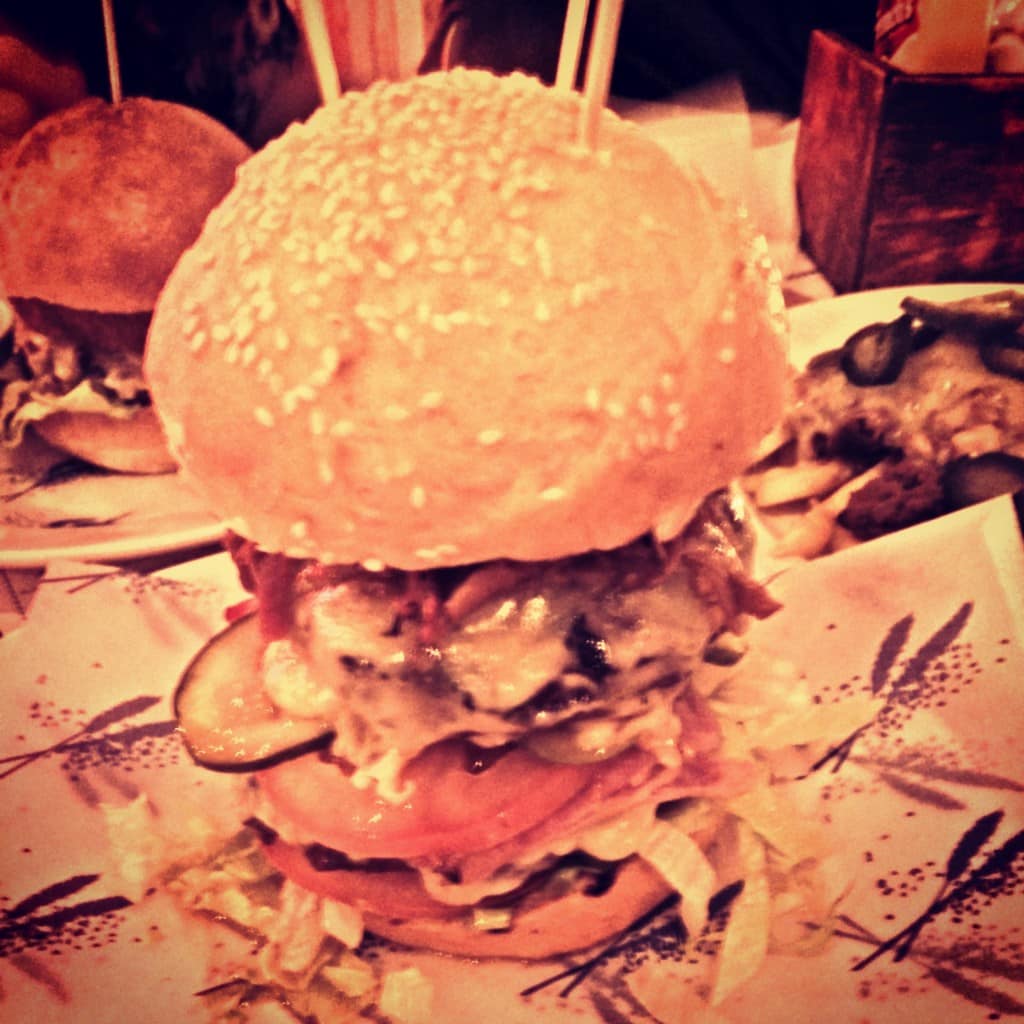 So my burger was the THE MAC ATTACK – Mac & cheese goes down in history as one of the world’s best comfort foods. We’ve managed to put it in a burger – with Bacon. Enough said. Served on a glazed white bun with a bread crumbed mac & cheese fritter, Virginia sweet cured bacon, homemade beer mustard, lettuce & cheddar.I think my eyes may well have been bigger than my belly as this was a beast of a burger. I was curious to try the mac and cheese fritter and it lived up to expectations. It was crispy on the outside with the mac and cheese remaining firm. Not a sign of oil on the inside which was an achievement. The burger itself was well seasoned and very tasty. The bacon could have maybe been a bit thicker but given the size of the burger, this was a minor detail. I had mine served up with a side of curly fries which again were good. Nicely served up in a white tin cup added to the detail.

Mr Edinburger was recovering from his shenanigans the night before (work night out with a free bar!!) and ordered a mountain of a burger. It was the MAN VS BURGER – Not since Rocky versus Apollo Creed has there been such a fearsome pounding of meat. This burger is not for the feint hearted. 2 x 6oz beef patties, BBQ beer pulled pork, virgina sweet cured bacon, Cheddar cheese, lettuce, tomato and gherkins. He made quick work of this and was amazed to find there was actually 2 beef patties in it. Oozing with cheese and pulled pork it was definitely doing the job as he scoffed it quicker than you could imagine. As if that wasn’t enough he ordered a side of chilli cheese fries. This was a much bigger portion than he had anticipated. The chilli was well seasoned and had just enough kick to it to appeal to even the korma lovers amongst us. 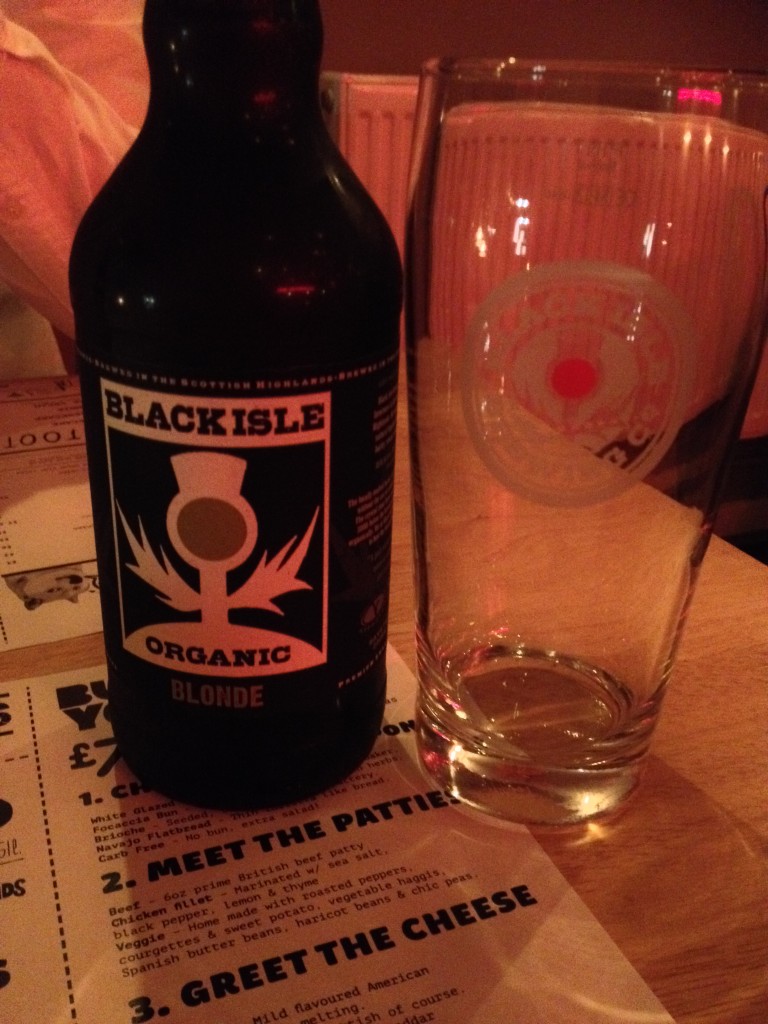 The beer selection here deserves a mention. It has a wide range of guest beers to IPA’s to wheat beers. There really is something for everyone and alongside the more popular Belgium favourites you’ll find Black Isle and other great Scottish Brews.

Overall we enjoyed our visit to Just Burgers and Beers, the staff are friendly and our burgers arrived in what seemed a few minutes! Only slight criticism is the price. For two beers, our burgers (£10 and £14) and sides  (£3 and £6) it was £43. Not the cheapest meal out but it was definitely very tasty. I think next time we visit we’ll book ahead and make the most of their reservation only offer burger,beer and fries for £10 Mon-Fri and £15 Sat & Sun.