Now we both love a good burger, so when Kirsty at Scottish Blogger Network offered us the chance to try out Hard Rock Cafe on George Street, as part of a Christmas collaboration we jumped at the chance.

First thing you notice when you enter is how incredibly busy the place is.  We were booked in on a stormy Wednesday night and the place was still heaving.  Surely with this many people in here, the food must be good!

As we were here with a voucher, we were limited to the Gold menu, which had less selection but still there was something for each of us.  We had a look at the main menu and decided to order the nachos to start and just pay the extra.  The starters all seem a little expensive but then when you see the portion size, you definitely get plenty for your money.  We choose to have the nachos with grilled fajita beef.  When the waitress came to take our order we were asked if we wanted guacamole, I found this a little strange as I assumed the nachos would come with this but we said yes.

When the nachos arrived it was a huge plenty.  Definitely made for two people sharing, if not more.  The nachos had plenty of cheese and the chips were huge.  However, the only thing letting them down was the grilled fajita beef which was a little sprinkling and the beef a little chewy.  For the price, we thought they are a overpriced, could have done with some more sour cream and salsa but they did fill us up.  One thing to remember is the guacamole comes as an extra and was £1.65 for a small pot. 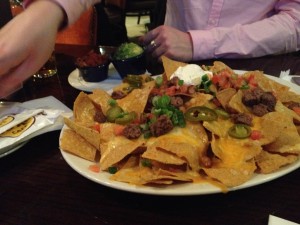 Up next was our burgers.  I had opted for the BBQ PULLED CHICKEN SANDWICH and my partner had the bacon cheese burger.  The time between finishing our starter and the burgers coming out was just about right.  It gave enough time to let the nachos digest and make way for the burger.

My pulled chicken sandwich was very tasty, the BBQ beans and coleslaw served with it, matched the sandwich really well.  Because i’d had the nachos before I was not able to finish the whole thing.  I was beat. 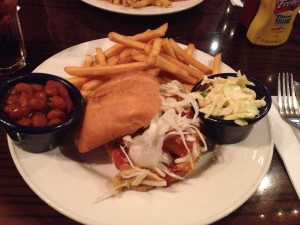 The other halfs burger was tasty but not as good as some other burgers in Edinburgh he has had.  I think he expected much more burger for the money. 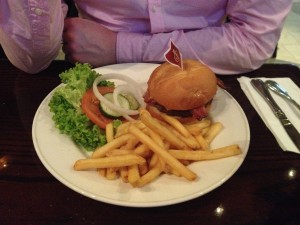 You would think after all the food we had eaten, we wouldn’t have room for dessert.  But we decided to sample their ice cream, with both of us going for chocolate. 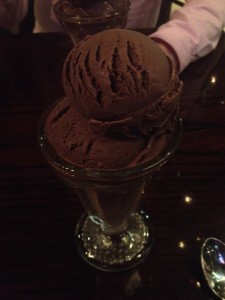 The ice cream is fantastic, it’s proper ice cream.  It is very chocolatey and very tasty.  This rounded off a lovely evening.

What did we think overall?  Well the staff are fantastic, Teresa explained everything to us and looked after us well.  She made sure we had everything we needed and made sure we were topped up with drinks.  Even in a busy restaurant we felt very well looked after.  The food was tasty but we felt it was just missing that something and a little overpriced for what it was.  We’d probably come back to try something different but it would be for mains and desserts.

Hard rock cafe is definitely somewhere for friends meeting up and work parties and less so for couples wanting a romantic evening.