Last month we ventured through to the wild west to see the wonderful Ryan Adams at the Royal Concert Hall. We also took the opportunity to finish work early, get the train through and sample some of what Glasgow had to offer in the food department. Miss Edinburger had done her research and had booked us a table at Alston Bar & Beef inside Central Station.

To be honest when I heard it was inside Central Station I was a bit sceptical as to how good it was likely to be. However once you go in the door you are straight down the stairs and into a lovely bar space which leads on to a further dining area with calm lighting and a simple, stylish layout. Good start. 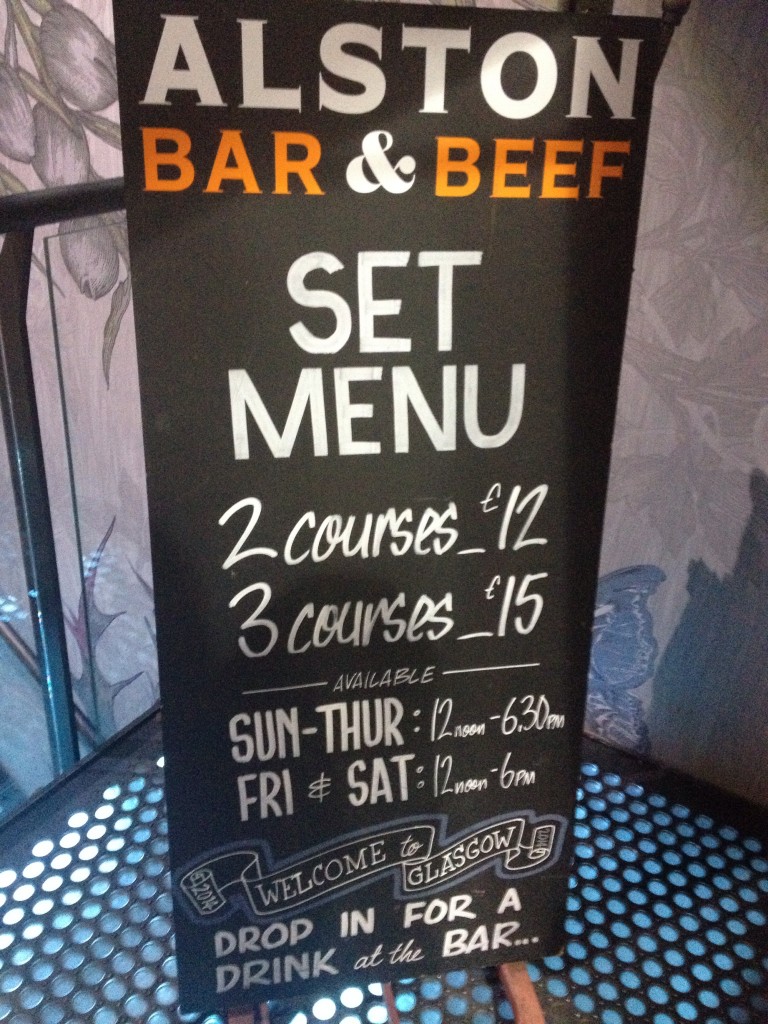 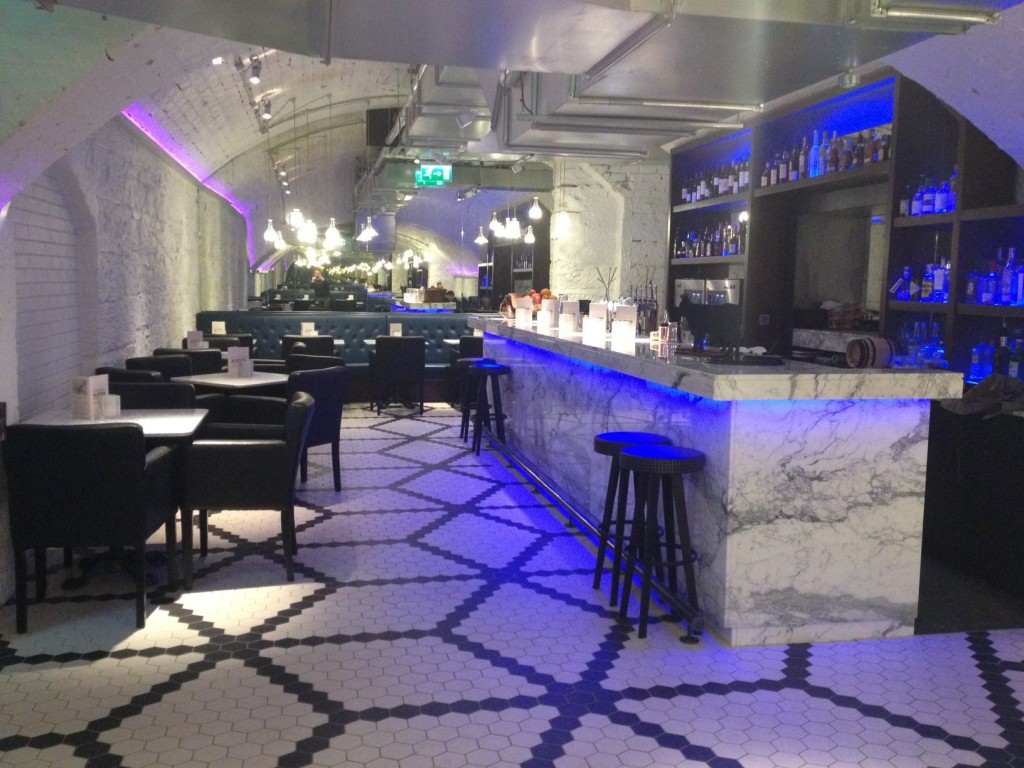 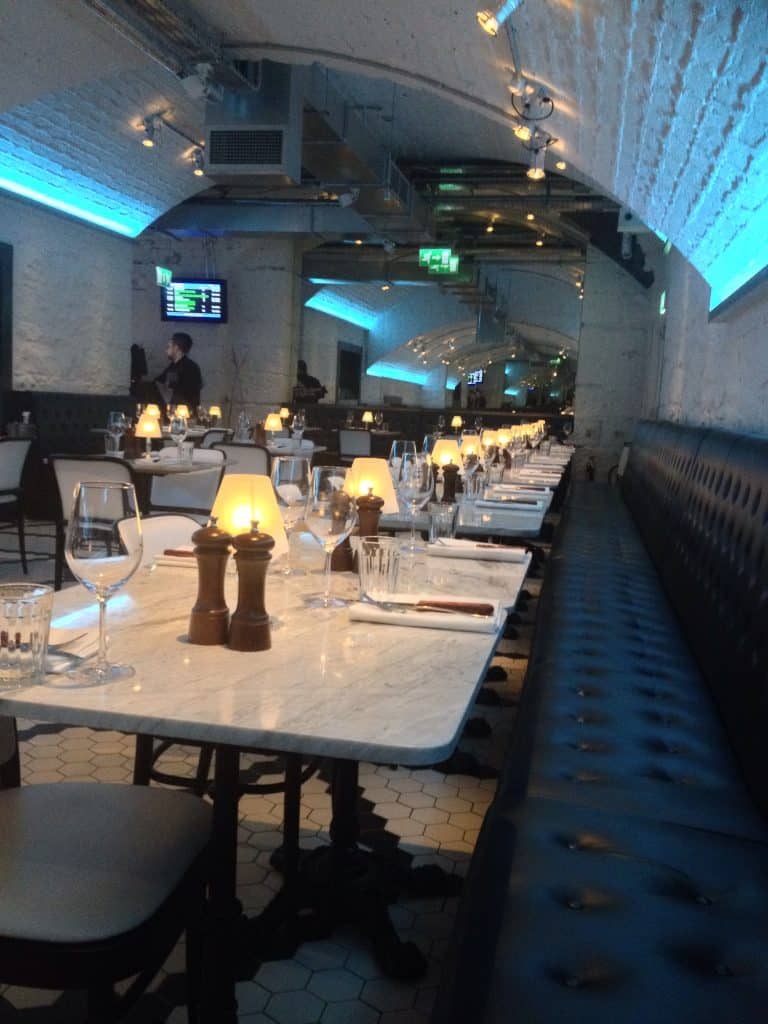 I’m a big gin fan so was pleased to see the impressive Alston Gin list, with over 50 gins from Scotland, England, France, America, Holland and Germany. I settled for a Tanquery No.10 & tonic and she went for the Gin & Gingerbread cocktail which consisted of Caorunn Gin, lime juice & orange bitters served over ice and finished with homemade gingerbread beer. Both were lovely and refreshing. Seeing as we were making a night of it I also ordered a draft Innis & Gunn for good measure. My initial scepticism was quickly dispersing into a gin fuelled haze. 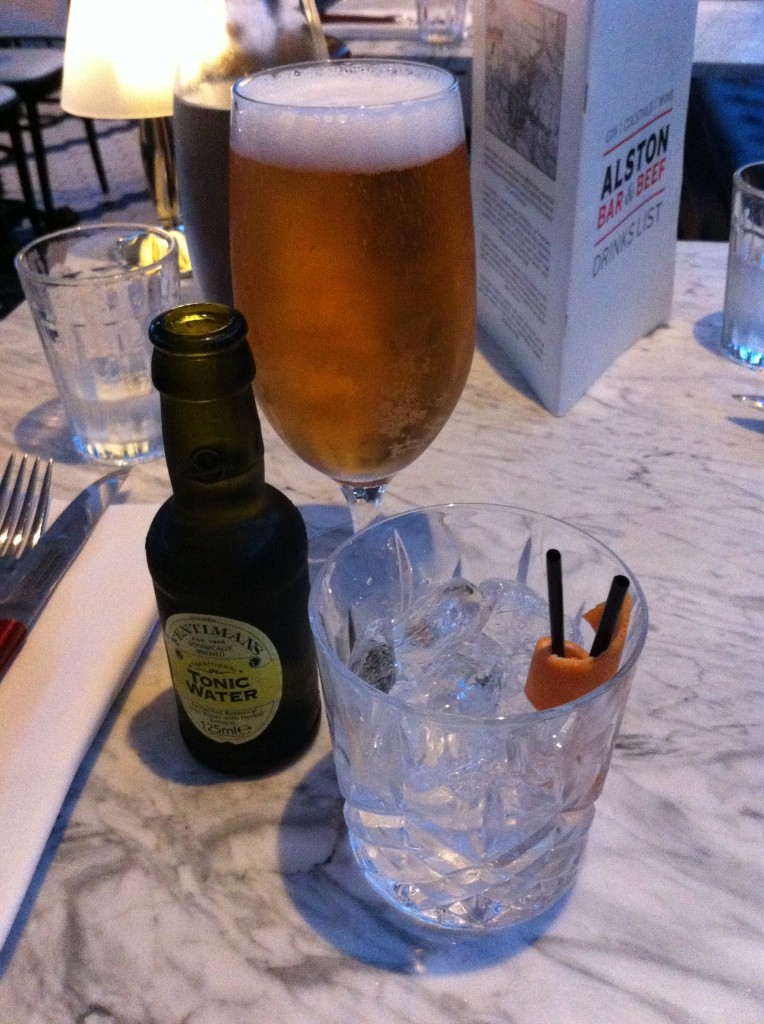 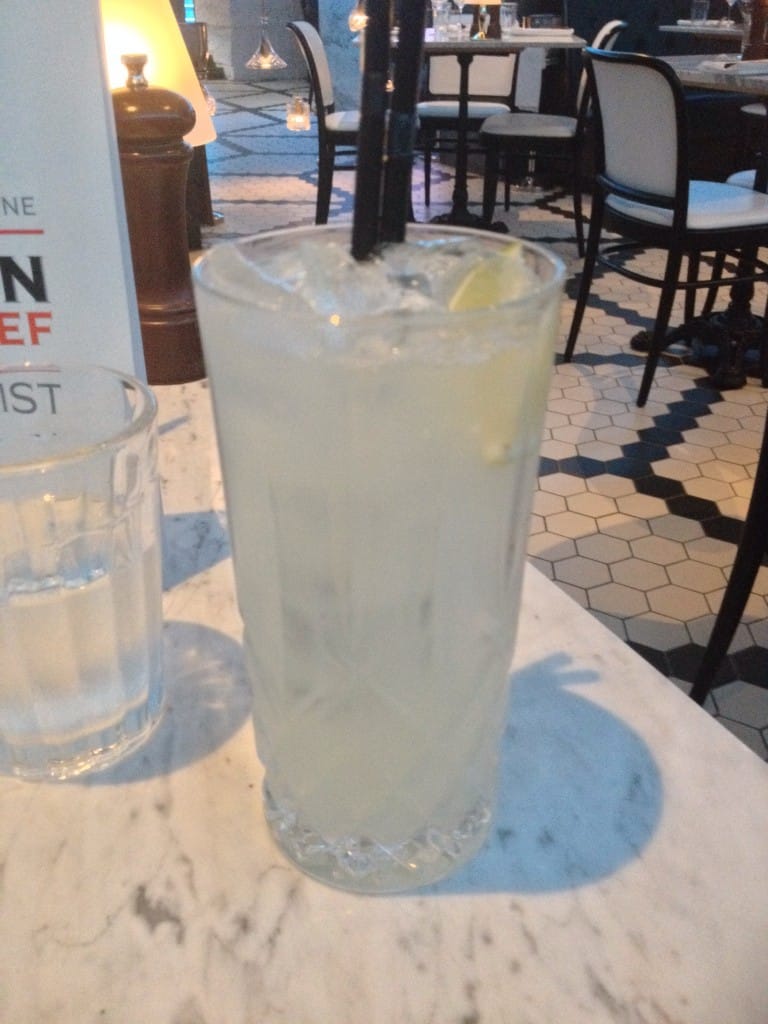 Despite the main focus at Alston being the beef, the food menu contains a good variation of dishes aside from the beef options with chicken, veggie dishes, fish and salad (although if you are ordering salad in here then you need to have a word with yourself, you’re doing it wrong). I didn’t have any problem deciding and opted for the Pan Fried Scallops with Pea puree, Parma ham & Black pudding to start and Miss Edinburger went for the Beef & Roquefort Croquette with Horseradish cream. Both starters were very tasty, the scallops were cooked perfectly and the crisp black pudding and parma ham all worked together very well. The croquette was generously filled and offset well with the horseradish cream. In terms of portion size it was the perfect amount to allow space for the main course. 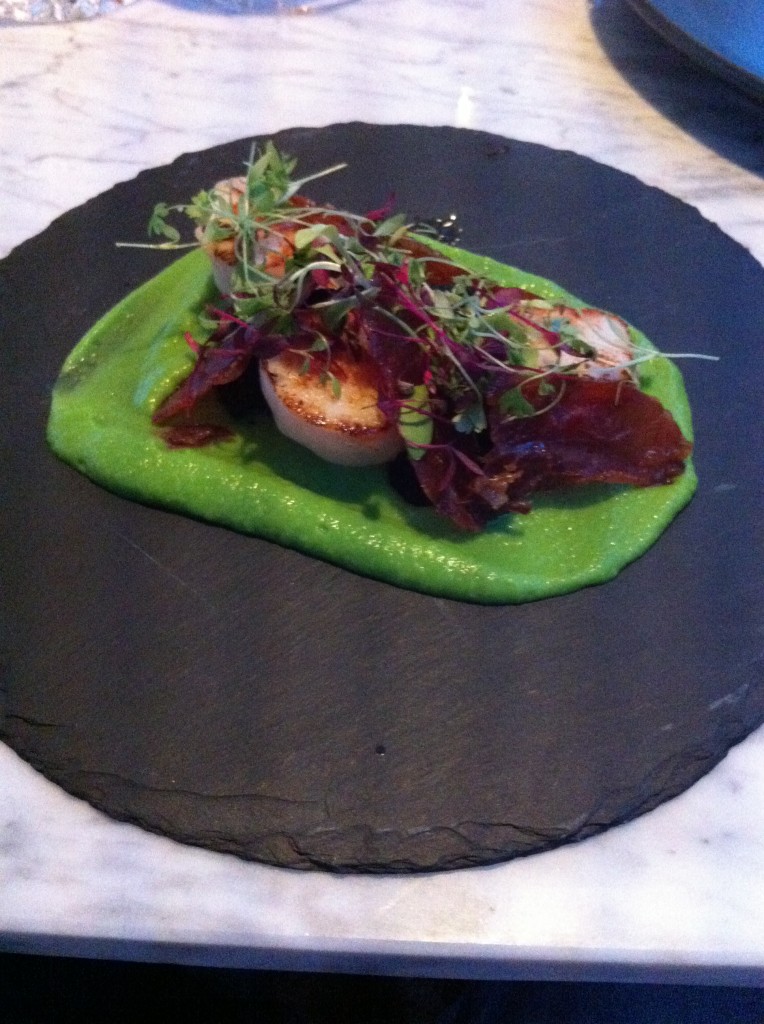 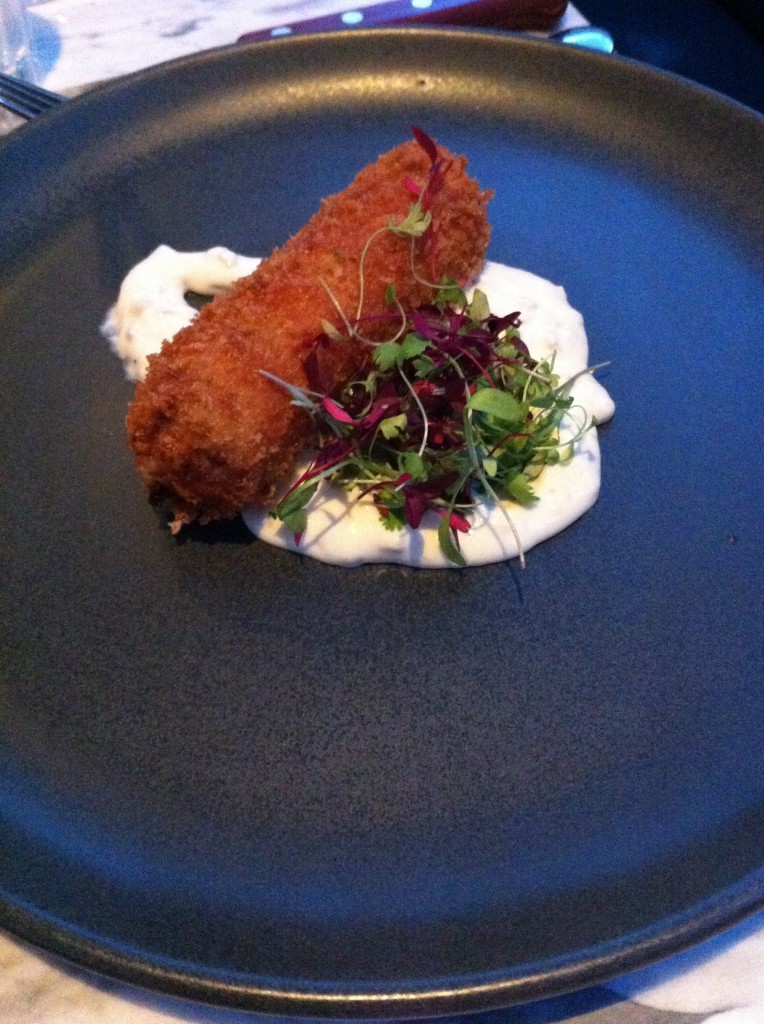 For the main event I went for the 300g Dry-Aged Rib-Eye Steak Medium Rare with Peppercorn sauce and she decided on the 35 day-aged Rump Burger with Parma ham, Swiss cheese, pickled cucumber, Alston burger sauce, lettuce & chips. Again the food did not disappoint. The steak was delicious, a generous size, cooked perfectly, very tender and not a touch of fat in sight. For a boneless rib-eye I thought that was pretty impressive. The chips were proper big steak chips and were well seasoned and the peppercorn sauce was lovely and smooth. Not being in the fine city of Edinburgh this is difficult to say but I have to admit it was one of the best steaks I have had. So good I would happily take the train through again just to have another.

Miss Edinburger was also suitably impressed with her substantial rump burger. She couldn’t finish it all so I also managed a taste, again the meat was perfect and the burger sauce was really tasty. 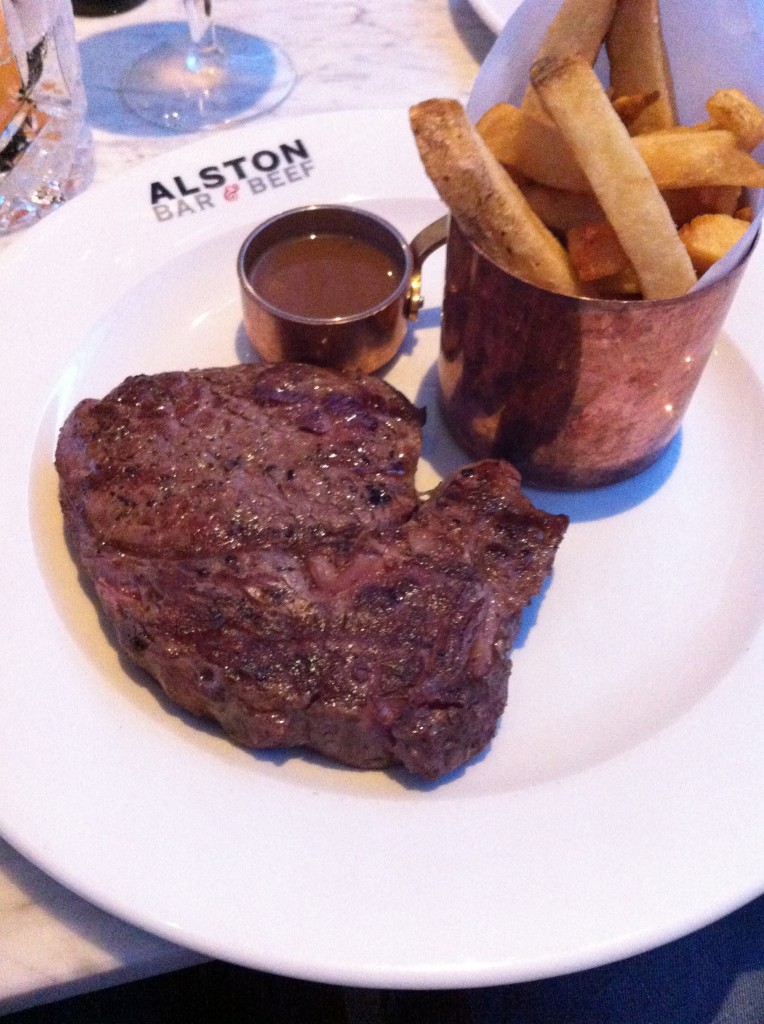 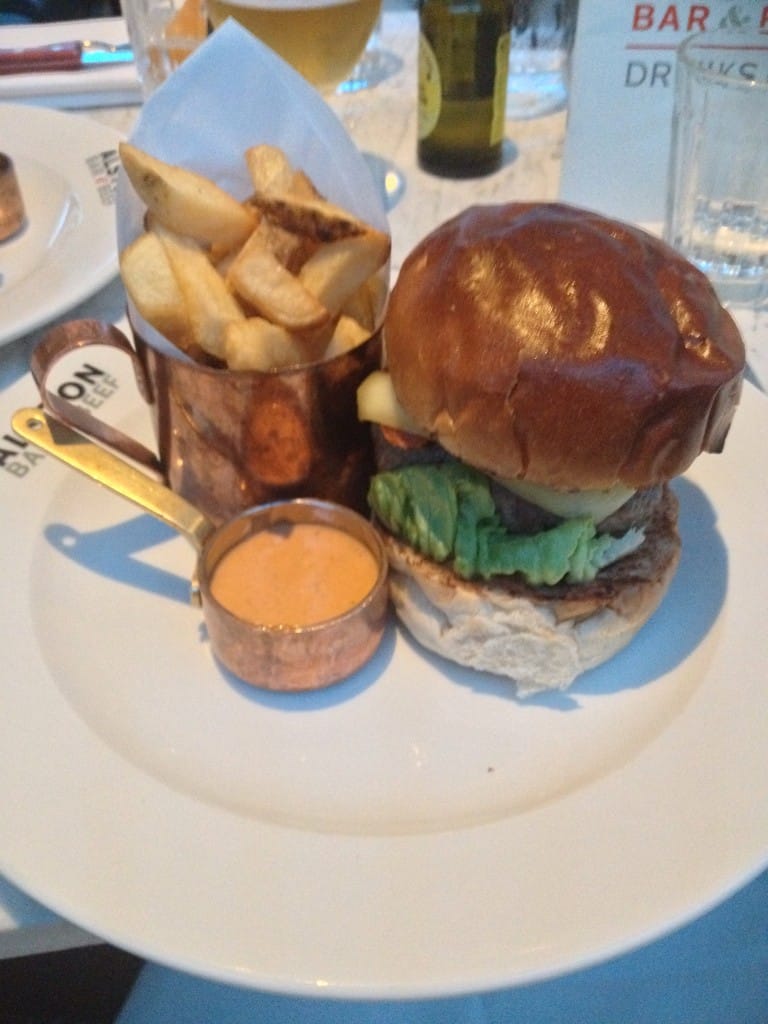 The other more sensible half was done at this point but I powered on and went for the White Chocolate Cheesecake, which to my surprise arrived de-constructed. I wasn’t sure what that was all about at first but quickly came round after tucking into it. The cheesecake was again very tasty and having the option each mouthful of going full white chocolate cream cheese or a little or a lot of the base was great. 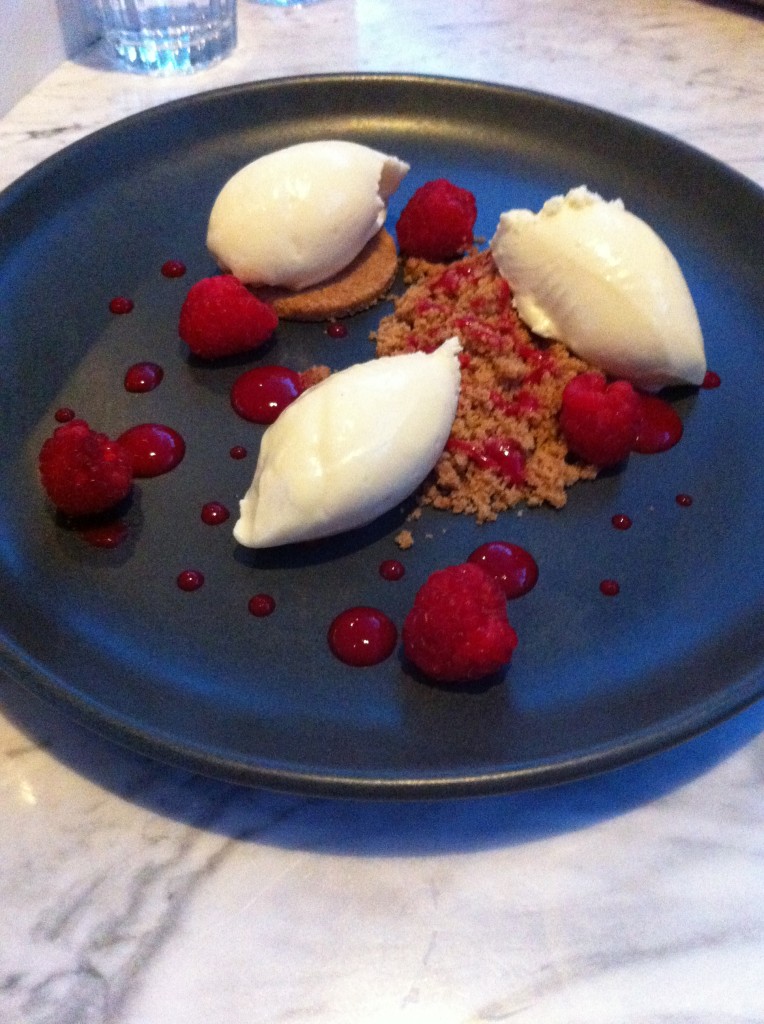 The whole experience of Alston was excellent; fantastic food, great gin and cocktail selection, a nice setting and friendly staff. Couldn’t fault it at all and we will certainly be back again when we next venture through to Glasgow.